We’re going back in time today, looking at one of the very first home consoles to really make a splash best atari 2600 games in the market.

Released in 1977, the Atari 2600 actually had a wood veneer on it, in case you’re not sure how old it is. In today’s money, it cost around USD800, a sobering figure for those who thought the USD600 PS3 was a ridiculous price.

Not only did the Atari sell well, it had a solid bevy of great games. Here are some of the best:

No doubt one of the stranger games in a pile of strange games, the concept behind Joust is that you’re riding an ostrich into battle against other knights riding ostriches into battle over a lake of lava.

There’s a reason it was featured prominently in the novel Ready Player One: Joust is fun, twitchy, memorable, and just plain weird.

Easily one of the most famous and best Atari 2600 games, Pitfall! Featured the adventures of Pitfall Harry – a very loose clone of Indiana Jones – through a jungle landscape of increasingly more dangerous hazards.

Pitfall set one of the earliest bars for side-scrolling platformers, forcing you to swing over lakes, jump over snakes, and avoid falling into pits long before Mario was on the scene.

It also had a crazy time limit and a pretty steep difficulty spike.

You’ve either played Breakout or a Breakout look-alike at some point in your life – maybe it was the computer lab in elementary school, maybe it was a Flash game on a browser somewhere.

Breakout had such an easy, entertaining concept that there’s no surprise it’s been imitated so much. It’s simple – remember Pong? Okay, this is Pong for one player. It’s the digital equivalent of solo racquetball.

Breakout features only three elements – a ball, a line “paddle,” and a pile of multi-colored bricks. It’s your job to move the paddle and bounce the ball into the bricks, destroying them for points.

With a name like Secret Quest, how can you go wrong?

Strap on your spacesuit and get ready to defuse some bombs. Secret Quests puts you, a space guy, onto space stations filled with ravening aliens. Your job is to either

A) diffuse the bombs the aliens set or

B) set a bomb yourself to blow away the alien menace.

It’s actually a fun game that makes you sweat, especially when a bomb is about to go out and you have to burn rubber to get out in time.

Fun fact about Secret Quest: It was the final release for the 2600 – no other officially-released games would come after.

There’s a reason Missile Command lasted as long as it did, from its earliest days in the arcade, to the Atari, and then to pretty much every Windows PC as a built-in game from 1993 to 2000.

The object is simple – don’t let your city get blown up. No doubt inspired by Cold War terror, Missile Command is about using your anti-aircraft gun to shoot down missiles before they can obliterate your six houses. Or six towns. Or six castles, it’s hard to tell with the graphics.

The missiles come fast and unrelentingly, and you have to predict where they’re going to be with your blossoming explosions.

Missile Command is still as fun as it ever was, and it’s an exciting way to pass a lunch break or survive a waiting room.

Speaking of space shooters – Asteroids was and is a great game with an exceedingly simple premise. You’re a little triangle space ship lost in deep space, trying to survive a barrage of meteors, comets, and asteroids out to wreck your day.

You turn and fly the ship around the screen, blasting large asteroids into smaller pieces that you then have to avoid or blast again.

Timing your shots and anticipating the debris are surprisingly satisfying. Asteroids is one of the best Atari 2600 games, and it truly stands the test of time. 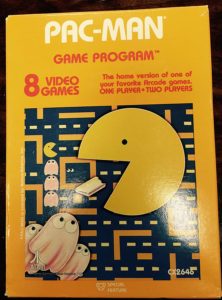 Surprisingly, many Atari games really shined when it came to multiplayer, and Outlaw is no exception.

You and the other player take the role of a rootin’ tootin’ cowboys intent on filling each other full of daylight. You’re on opposite ends of the screen, and you try to ricochet bullets off the walls in a Pongish way in order to hit the other player.

Shooting right at them is out because there’s a giant cactus in the middle of the screen, and as well know cacti are bulletproof.

It’s a simple concept that works great, and it might be one of the first multiplayer shooters in existence.

In Adventure, you play a pixel who’s been sent to find a magical Grail-like chalice and bring it back to your castle. And that pixel thing isn’t a joke, you basically play a small square. Adventure is one of the earliest Atari games, and the graphics show it.

However, it’s still a hoot because of the open gameplay and the dungeon-crawling aspects. You’re best on all sides by dragons and bats. You have to find items to unlock doors and weapons to kill dragons.

Fun fact about Adventure: Did you know Adventure featured the first “Easter Egg” in video games, in the form of a secret room that had the developer’s name in it?

It wouldn’t be an overstatement to say that Space Invaders may the primary reason for the Atari 2600’s success. Space Invaders was one of the most popular arcade games at the time, and Atari getting the license was considered a huge boon.

Space Invaders is a simple concept, but at the time it was shockingly complex. You shoot aliens as they try to land, but the way the aliens were constantly shifting was revolutionary at the time, as was the continuous music that played during the gameplay.

The music also sped up as the aliens got closer and closer, a reactive gameplay element that hadn’t been seen before.

Another fantastic multiplayer game for the Atari 2600, Warlords allowed you to play four players against each other in a four-way siege.

You each have a castle in the corner of the map, and your job is to destroy the other three castles – and to prevent your own castle from getting demolished.

You have a movable shield you can use to block attacks to your castle, and an ability to launch catapult fireballs at your enemy.

When you’ve got four people playing, it quickly becomes a game of easy alliances and even easier betrayals as you whittle each other’s castles down to rubble.

Centipede is a tricky take on Space Invaders, and at the core it’s very similar.

It’s your job to shoot all the monsters coming from the top of the screen down to the bottom. You’ve got a laser-gun type weapon, and the enemies are ever-advancing.

What makes Centipede different are all the obstacles in your way, in the form of dozens of yellow mushrooms scattered around the field. And because the centipede is just one long animal that you have to pick apart, the game starts easy.

You’ve got a big target and a lot of lasers. However, as the centipede gets closer and more broken apart, you have to manage these tiny segments.

Centipede lived in arcades and bars across the world, and it’s no surprise it was a hit when it came to the Atari 2600.

River Raid is one of the earliest top-down shooters. The screen scrolls vertically as the player guides a jet over enemy territory, getting points to blow up enemy aircraft, fuel tanks, and infrastructure.

The game was a smash hit and has the distinction of selling over a million cartridges. The gameplay is simple, addictive, and pleasingly difficult, and has tons of replayability because of the semi-randomly generated terrain and enemies.

It’s all one of the first hit games developed and designed by a woman, making it a notable historical landmark as well as just a good time.

Kaboom! Is a truly terrifying game of random chance and twitch reflexes.

Your job is to catch the bombs being dropped down the screen by the Mad Bomber, a frightening figure in a bowler hat who just wants to ruin your day.

Now, catching bombs seems like a bad way to avoid danger, which is why you have to catch the bombs in your trusty bomb-catching bucket.

The gameplay is shockingly fun as you rush all across the screen, trying to manage your buckets and predict the Mad Bomber’s crazy antics.

Kaboom! solved over a million cartridges, as well.

Fatal Run is a fun racing game on its own, but it comes with an interesting premise: you’re in a dystopian future, and it’s your job to run the cure for a radiation illness.

On the way, you’re beset on all sides by other racers, marauders who are trying to take you down before you can deliver the goods.

You get shoot, ram, and just basically wreck enemies while racing down the street. It was a massive hit for the Atari 2600. ?And is also interesting for having a save-progression mechanic in the form of randomly generated passwords you could use to get back some of your progress.

If you were a Star Wars kid, and you owned an Atari 2600, there was no better day than the day you got Empire Strikes Back. One of the very first licensed video games, Empire Strikes Back tasked with you flying a snowspeeder across Hoth, blasting Imperial Walkers and just trying to survive their oddly heat-seeking laser bolts.

While it may not have been the most innovative game on the Atari 2600, it has always been a fan favorite. Plus, it had music from the movie right there in the game!

?Okay, it was mostly just the Star Wars theme, and the game could only manage about four seconds of it, but at the time it was quite a thrilling achievement.

While many were introduced to the world of glowing yellow circles who ate ghosts through her husband Pacman, Ms. Pacman is generally considered the superior title.

It improved on the original with things like moving fruits and more erratic and randomized ghost behavior, as well as different colored mazes and solid walls that make it a little easier to see what’s going on.

Both Pacmans are, of course, amazing games, which is why they took the arcade world and the subsequent Atari world by storm and became a pop culture phenomenon.

We’re back to the wide world of Atari multiplayer with Combat, a title that allowed you and your buddy to command military vehicles to tear each other to ribbons.

Combat was actually one of the original Atari launch titles and was released in 1977 – the same year as the original Star Wars movie, to give you some context.

Combat had different scenarios, allowing two players to attack each other with tanks, fighter jets, and even bi-planes.

The scenarios were all different – the tank fight scenario looked more like a maze where you hunted down your friend and blasted them apart.

The bi-plane and fighter jet scenarios had a few different options, including dog fighting and a three-on-one dog pile.

The game featured different weapons for each vehicle, including machine guns and guided missiles.

Luckily these early digital treasures haven’t been lost to the mists of time. While acquiring an original Atari 2600 might be a job of work, there are plenty of options to play these old gems.

Atari has released quite a few all-in-one consoles that plug right into your TV and allow you to give these games another shot. There are mobile phone and tablet apps for many of these games, and almost all of them can be picked up for PC or emulated without too much difficulty. However if you're looking for other options, may we recommend a rousing game of Warlords?