I acquired this wonderful item several years ago and am now offering Atari collectors the rare opportunity to add this prototype to their collection! You will likely never see this item up for auction again. Please note, this is a pre-production prototype – there are no electronic parts inside. This project was cancelled before the boards were manufactured.

Mr. Vendel provided me with a firsthand look at the history of this amazing Atari 7800 Remake project that was ultimately cancelled. From its ashes rose the successful Atari Flashback plug and play console line.

â€œYes, I designed the case along with Tom Palecki of Pear Design whom I brought in to finalize things and run off 8 cases – 10 were actually made as I had two special pearl white ones designed specifically for myself and another for Mark Diluciano with whom I commissioned to create an exact replica of the Gerber files of the original Atari 7800 1984 PC board so that it would fit into the casing.

The project was commissioned by O’Shea Ltd as they had approx. 1 million Atari 2600 and 7800 cartridges and wanted to bundle them in with a new console, so they wanted to product approx. 250,000 consoles.

O’Shea approached Nolan Bushnell about doing a “signature series” â€“ I have Nolan’s signature on file from him signing my Atari Pong arcade, we created a digital scan and added his signature to the case label.

The project fell through after that as O’Shea tried to source a factory to front all of the money to product the consoles, none would do it and in 2004 Atari directly asked me to produce a console for them, but had to have something ready within a 10 week window, so using an off the shelf NOAC chip the Atari Flashback 1 console was created.

Of the 8 cases, 6 were delivered to the client as per the contract along with the wooden low production test run molds (aluminum of high grade steel would’ve been needed for doing a full 250,000 pc run, the wooden molds were good for about 20-25 test runs only.) 2 grays stayed with me, which I later sold, but kept the pearl white unit along with the source molds built to create the wooden molds (2 units) of the 8 gray units, half were done with the Atari logo, the other half were done with ProSystem logo on them.â€

I asked Mr. Vendel if a production Atari 7800 board could be installed into this prototype shell:

â€œAlmost — the LED light-window on the new shell is much different from the original Atari 7800, so the motherboard needs one minor change – the LED and its stalk need to be removed and the led soldered back on and about 1/2 of the height of what it was originally at.â€

Other stuff:
Resistance 2 PS3 in a Rusty Box
SEGA NINTENDO LIGHT UP SIGN 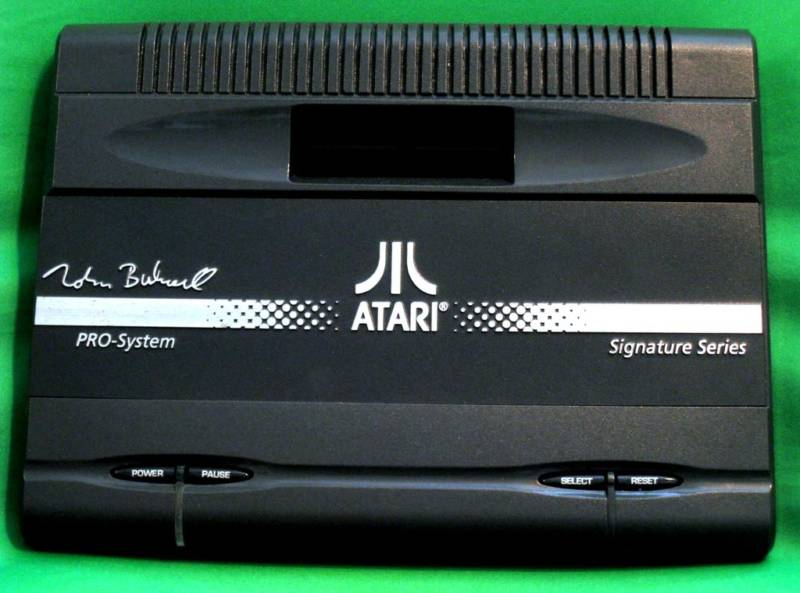