Hey, it’s Kim. Gameboy has been around for a while now, in a bunch of incarnations. With all of these Gameboys comes a long list of Gameboy games. Is anyone out there familiar with Kid Dracula? I’ll admit that I didn’t know about this game, but I decided to check it out after finding it on a list of hidden gems over at Racketboy.

Technically, it’s a spinoff of Castlevania. Our hero, Kid Dracula, has forgotten all of his magic and must relearn all of his spells as the game progresses. This gem from Konami is an eight level, traditional platformer, side scroller with one of the cutest little vampires you’ll ever see. If you play the game, you’ll pick up on the Castlevania similarities. The characters—villains—are similar, if not the same, only the cartoon version of themselves. You will also recognize the music but with a more upbeat spin on the arrangement. You can buy the Kid Dracula Gameboy game on Amazon and ebay. 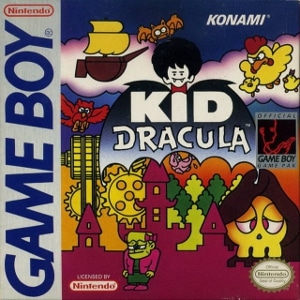 If you do take a look at this game, you’re going to see some crazy things happening with the prices. In the last three years, the price on the cart alone have almost doubled. In June 2013, the cart was selling for USD39.95; the price in July 2016 was USD77. Here’s the pricing timeline from the lowest point through the present:

These prices represent the trends for sales for loose carts. If you’re looking to get the game CIB you can expect to spend a lot more money. In June 2016, the CIB game sold on ebay for USD800. This is a huge leap from September 2013 when the same item sold for USD180. During 2016, the prices have risen from USD49.99 to 159.39 (as of August 2, 2016). Pricing on Amazon for used games (the game is only available from Amazon sellers) ranges from 39.99 to 276.99. Ebay’s prices also start around 40 and go up from there. Ebay even has a factory sealed Japanese version with a VGA near mint grade of 80 for just under USD2000.

The big question about why people are spending that kind of money may be in the market. The people buying these games are often buying them for the sake of nostalgia. Retro games are becoming harder and harder to come by, the population is growing up, and as we (yes, I’m part of that population) probably have a little more disposable income at this point in our lives. These games were part of our childhood and just might take us back to a simpler time. I have nothing against the games of today, but it gets surreal sometimes when it’s hard to tell if what’s on the screen is game play or live action.

Not all Retro Gaming is Expensive. Check out these Bargain Gems:

Did you know that we run a comprehensive catalog of classic video games for FREE??! It’s true! We have a newsletter service that sends you the average prices for all of your favorite classics for yesteryear completely free to you. All you have to do is sign up with your email. We’ll email our e-catalog once a day. Not only do you get a list of prices on your favorite video games, but we also send you links to these games. Just click the link, find a listing that best suits your budget, and watch your collection grow! Click here to get our catalog of classic video games for FREE!!