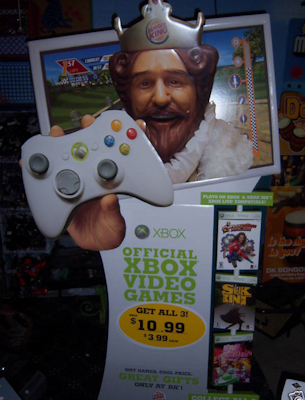 Here’s a BK Standee. The Burger King games came out around 2006 and was widely accepted by anyone who ate at that burger joint. They were cheaper (as you can see from the price, you get all 3 games for $11!) than a an XBL game. The games were pretty much just a collection of mini games split into 3 packages. They were so popular, Burger King sold over 2 Million of them.

So where exactly are those games now? GameStop had so many copies of them too but i think they either sent it to the dumpster or sold it to another company.. But you can find them easily on ebay. I’m still waiting to see if anyone actually submitted them to VGA for grading (I wonder if I submit one of the games with a Whopper, would they grade both? hmmm..)

On a more related note unrelated to burgers, the seller of the BK standee actually has a lot of other standees and other oddball stuff. Like this Gameboy Tetris Backpack, Titan (Test Unit) Universal Pro (im guessing this guy probably works at Gamestop, I see alot of these things there. They use these things to test systems to see if they work or not), Genesis Game Factory cart, etc.

Other standees/display boxes he offers (they are sort of reasonable)