Hi, Kim here again. Hope everyone had a wonderful Turkey day and are recovering from trauma experienced during Black Friday. Hopefully, this new collector’s item will brighten your week. Everyone who collects classic, retro gaming memorabilia should check out this rare Street Fighter II item. It’s a print box set of Super Street Fighter II art.

This listing is for a very limited edition collection. Only 100 were produced. You can find plenty of single listings. But, these complete sets are extremely difficult (and expensive) to find. 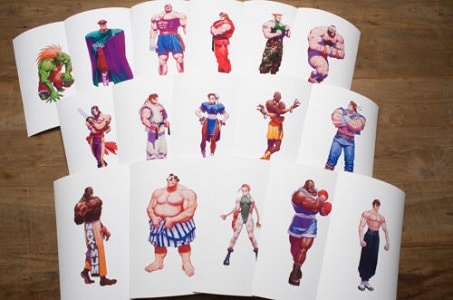 This Street Fighter II art, originally advertisements for Super Street Fighter II, was done by CRMK. If you’re not familiar, CRMK (aka Bengus) is a pretty big deal in the world of Capcom art, and is responsible for the iconic vision of Street Fighter we’re all so familiar with. The prints are hand numbered and the Capcom logo is embossed on each one. There are 16 prints measuring 12 by 10 inches, all contained in a collector’s box. Each box set also includes a certificate of authenticity signed by Yoshinori Ono, the executive producer of Street Fighter.

In February 2013, Capcom asked players who their favorite characters/fighters were. Every character from every Street Fighter game in every country was eligible for voting. Some of the top characters were Ryu (#1), Ken (#2), and Chun-Li (#4). Chun-Li was always my favorite; she was the first girl (that I remember) that seriously kicked butt. I would always play as Chun-Li, and play way too long so I had to run home from my friend’s house so I didn’t get in trouble for being late. But, what I remember best was playing the original SF II in an arcade for the first time. It was a near-religious experience!

I’m also going to drop this video here because it’s awesome and I can. The world needs to see it before Nintendo’s lawyers’ remove it from history!

And now that Thanksgiving has passed, I found some fun Christmas/holiday themed listings for stockings and ornaments:

PS: We’ll be taking some time away from the site until mid December. See you again in two weeks!