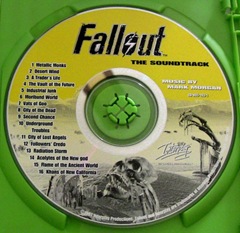 Fallout is another series that should get a lot of buzz as the new game comes out. Older merchandise already sells for a fair amount, and I can only see that increasing in October when the new game is released.

It has a rabid fanbase (of which I am a member) and there hasn’t been a game released in the series in over seven years (ten if you only include the main series and no, I’m not counting brotherhood of Steel). Both are factors which will definitely help boost prices. Plus, if the game is good than you can count on people who are new to the series wanting to investigate the original games. For example, a complete Fallout 2 Original Big Box already fetches over $60.00.

That’s the mark this soundtrack has already passed with a full four days to go. Not sure if it where it was available and I can’t find out by Googling. The soundtrack is actually pretty good and judging by the price, a lot of other people may agree.