This past Tuesday brought us the highly anticipated sequel in the Fallout franchise, Fallout 4. After a nearly 7 year hiatus Bethesda Game Studios tosses us right back into the throes of its expansive wasteland that we’ve all come to know so well. Bethesda has chosen to stay true to the game’s predecessors and didn’t stray too far in regards to the Fallout 4 gameplay.

It is the narrative, however, that Bethesda has clearly wanted to bring front and center. Player choice consequences already seem to be heavily intertwined, and the addition of spoken dialogue enhances the universe that you’re placed in, making every decision carry more weight. With nearly 15 hours invested in the game, Fallout 4 is shaping up to be a great addition to the series in which name it bears. Read my Fallout 4 review for everything you need to know before you suit up.

Fallout 4 Review – A Return to the Wasteland 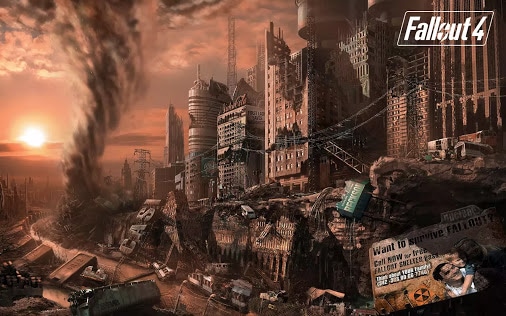 Veterans of Fallout 3 will immediately feel at home when they take control of the lone protagonist as much of the gameplay and designs have made their way into Fallout 4. Obviously Bethesda Softworks wants the familiar content from its previous title to help build the structure of their sequel in order to make the player’s immersion into the Commonwealth Wasteland that much more rewarding.

The game begins with a brief glimpse of the world prior to the bombs falling. Here you are briefly introduced to family members that will become a major plot point in the narrative. After being dropped into the vault your character (who you can choose to be either a man or woman) quickly becomes aware of the game’s antagonist. You may not know who your character was, but you know what he/she has lost. It’s a strong motivational tool that gives the protagonist motivation and helps to establish a connection between the player and the game.

The setting for Fallout 4 takes place in apocalyptic Boston. When initially looking at your map it may look small but don’t be fooled. The city offers plenty of discoveries to go along with beautiful landscapes, tons of loot, and valuable items to boot. But what’s really fun about the urban landscape (dubbed Diamond City) are the indoor spaces open for exploration. Moving through the buildings and opening doors lead to vast open spaces. Just when you think that the areas is limited you’re reminded that there is a wealth of content to be discovered.

Although this is a great game it falls short of perfect. One thing that I love (that I’m not always a big fan of in other games) is the addition of the spoken dialogue. I feel that this gives your protagonist more life; he/she doesn’t just feel like some marionette that you make dance across the screen. The dialogue and the tone and stress on certain syllables are some of the best voice over acting I’ve experienced in a game. So much so that I haven’t skipped over any line yet. Nor did I ever switch on the subtitle option. It is all so believable. I felt that any reasonable person would react and say the same things my character did. This may form a little separation between character and player but I didn’t care. I felt like I was watching a great cinematic sequence. And it’s this immersion into the fabric that Bethesda has spun with its cleverly placed pieces of yarn that make this perhaps my favorite Fallout game even though I’m only a fraction of the way through at the time of this video game review. The greatest joy thus far for me has come from venturing around the wasteland and poking at the different factions to see what reactions I elicit from them. I’ve already made some gut-wrenching decisions and I’m looking forward to seeing how they play out. Each move you make is like throwing a stone into a pond. And the game’s inhabitants are keeping tabs on what you do.

Some of the few gripes I have for my Fallout review are minor, but they’re worth noting. There are some missions in the games the require specific actions but there is no tutorial to guide you in the right direction. I’m not saying I want everything spelled out for me, but a little nudge could save so much time. And while I enjoy the side missions they mostly play out the same. Receive mission. Dispatch enemies. Accomplish goal. Return to the individual that gave you said mission. It’s a tried and true formula that needs to evolve. I also thought the map could’ve been easier to use, and shorter load times would be awesome.

Fallout 4 is not going to stand out the way the Fallout 3 did but there is plenty of meat in this game to sink your teeth into. I’m going to head back into the wasteland and see what trouble I can stir up. And with so much to do I might not venture out until a Fallout 4 expansion is released.

Where can I buy it?

Here are some Fallout merchandise auctions currently running on eBay:

Fallout 4 Vault Boy Vinyl Figure – The Fallout 3 Bobbleheads sometimes sell for $100 a pop. You do the math.

Fallout Vault-Tec Limited Edition Watch – Hella cool but also hella expensive. They were selling under the $200 range but have shot up since then. If you’re serious about a F4 collection, grab em before the prices get stupid.

The History of Fallout Guide Book – Promo – Awesome; not too dissimilar from the “World of the Witcher” coffee table book