Last week (May 19) Bethesda Softworks released their biggest DLC yet. It just so happened to be for a little game called Fallout 4. You may have heard of it. You can read the official GameSniped review of Fallout 4. I’m going to tell you a little about Fallout Far Harbor and list some Fallout merchandise I found. You can see the official Far Harbor trailer right here.

Far Harbor is an island off the coast of Maine shrouded in radioactive fog and inhabited by three groups: the residents of Far Harbor, the Children of Atom, and a peaceable group of synths. Good, bad, or impartial you have to work with all of them one way or another as you follow the storyline. You can play without Nick Valentine if you want, but what’s the fun in that? You’d certainly miss out on some info you get from Valentine. Far Harbor also has some pretty impressive “monsters.” One such monster is a giant hermit crab wearing a truck as a shell and another is an enormous praying mantis (both creepy looking at their normal size). There are also two weapons that can be extremely helpful: the Admiral’s Friend, a harpoon gun that is highly effective but slow on the reload; and Old Reliable, a specialized rifle whose name tells you everything you need to know.

This is a great addition/expansion to an already great game. There are, in fact, some other great games that are a lot like Fallout. You may have heard of these or played them, but I think they’re worth mentioning here. I’ll start with S.T.A.L.K.E.R.: Shadow of Chernobyl. This PC game has been around for a long time and features a map that it is an exact copy of the real Chernobyl. Wasteland is another good example; it is often credited as the inspiration for Fallout. And for all those Bethesda fans out there, I’m also including Skyrim. It may be a little more GoT than Fallout but it does have the extensive gameplay and a lot of map to work with.

Since today’s theme is Fallout, I have a pretty long list of Fallout merchandise for you. This includes Fallout 3 merchandise in addition to Fallout 4. And when you’re talking Fallout (and Bethesda for that matter), there is no shortage of Fallout merch. There are all kinds of merch out there that was exclusive to specific stores or conventions or bonuses that came with special editions of the games.

First I want to give you links for the Fallout Pip Boy Edition for each of the three platforms: 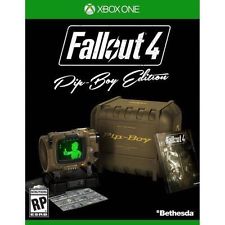 There is still a lot of merch out there for Fallout 3:

And then there are all the cosplay props: