I am a self admitted Fallout fanboy. Expect me to showcase everything I find as the release date for the third installment grows closer. 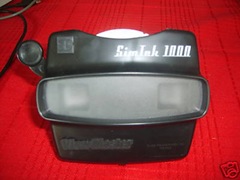 E3 apparently brought some new promo items out for the game. Up on eBay now is an empty Bottle of Nuka Cola and a very unique SimTek 1000 Viewmaster. Nuka Cola should be a very familiar item for anyone who has played through either of the games. The viewmaster is really something special though. It’s a custom viewmaster (those things you probably played with as a child) with a bunch of game images that appear in 3D.

Another seller has a bunch of various Interplay promo items. They seem to be an ex employee, as they’ve been selling a few similar things lately. Right now they have a Fallout Tactics Standee, a paperweight from the game Of Light and Darkness, a Mini Handcuff set from the PS1 game Crime Killer,  a pair of binoculars from the horrible PC game Voyeur, and a Baldur’s gate rubber stamp which was only used internally.