Hi all, Kim here. I’m back with yet another really amazing item for you all to check out. It’s the signed collector’s edition of Guild Wars 2 box set. 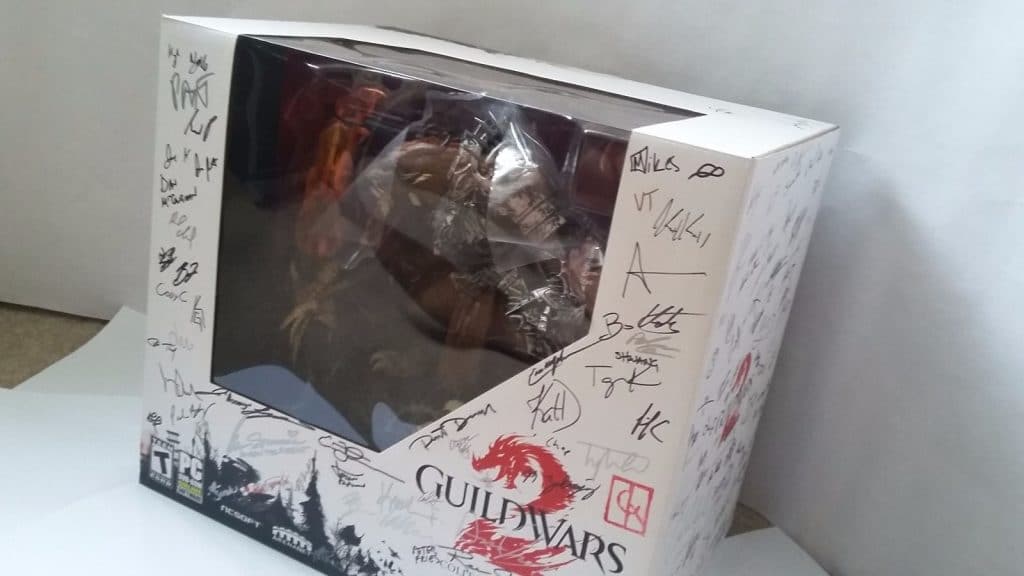 The game is not included in this box set of Guild Wars 2 collectors edition. However, here’s what you get: a 10-inch Rytlock figure, the “making of” book, a CD of the soundtrack, a custom art frame, and 5 art prints. All of these collector’s items come in the origin box signed by all of the Arena Net employees.

Guild Wars 2 is one of the more popular MMO games online. There is a lot of interesting things about this game that make it appealing. Do you remember those chooses your adventure games from when you were a kid? I loved those stories and this game kind of gives you that again.

“All of these collector’s items come in the origin box signed by all of the Arena Net employees.”

Every person that plays has their own experience, different than anyone else’s in a constantly changing world. Action oriented combat takes place PvP or in grand battles between massive forces. Dynamic events keep the game interesting and engaging.

Guild Wars 2 is one of the MMO games online that doesn’t require a subscription fee to play. You can find a whole list of free MMO games in our featured article.

MMO games, like Guild Wars 2, are big draws at conventions. BlizzCon is probably one of the biggest, that may be because its hosted by Blizzard Entertainment who is responsible for such games as World of Warcraft, Overwatch, StarCraft II, Heroes of the Storm, and HearthStone.

BlizzCon 2016 is More Popular Than Ever

BlizzCon 2016 was the 10th anniversary of the convention, which happens to coincide with the 25th anniversary of Blizzard Entertainment. It was held November 4th and 5th and it isn’t surprising that BlizzCon tickets sold out. If you bought a virtual ticket, BlizzCon stream allowed you to view various channels and get the experience of BlizzCon without being there. May be something you want to keep in mind for next year.

I’m going to leave you today with yet another list of Video Game Memorabilia, featuring Blizzard Entertainment and BlizzCon.