Here’s a game you probably never heard before: Kingdoms of Amalur: Reckoning. Another EA game so guess what, another EA online exclusive offer to get a REAL Signature Edition copy. This was announced back in December and there are only 2,000 copies of it worldwide. According to the official site, “All Prismere Troll figures in the Signature Edition will be signed by either Todd McFarlane, R. A. Salvatore, or Curt Schilling, are numbered 1 to 300, and normally retail individually for $175.00.”

All the copies they had for this specific edition have since been depleted for all 3 platforms. All that remains is a Special Edition and a Collector’s Edition which will probably be there for a while. At least 3 copies have been sold online so far and the game hasn’t been out yet. Expensive Edition worthy title! The game is set to be released in the states in February. 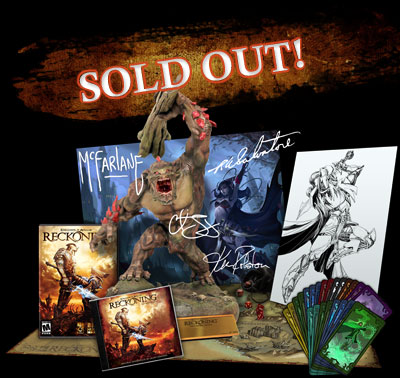 Update: gameSniped commenter winds has this to say:

Just a heads up, but there is actually another significantly more rare edition called the Exclusive Edition. The store selling these signature editions apparently accidentally oversold the Signature Edition by 12 copies (making it 312). To make up for it, they emailed all 312 purchasers a chance to upgrade to 1 of 12 copies of a new â€œexclusive editionâ€. It would include everything in the Signature Edition, except instead of a 1 in 300 lithograph, they would receive an alternate 1 in 12 lithograph. As well the troll doll (numbered 1 to 300 for the signature edition) would not be numbered (sort of a downgrade there). There is one of the 12 up for sale now on ebay here:
https://www.ebay.com/itm/Kingdoms-Amalur-Reckoning-Extra-Exclusive-Signature-Edition-Xbox-360-2012-/250969281891?pt=Video_Games_Games&hash=item3a6eef5563