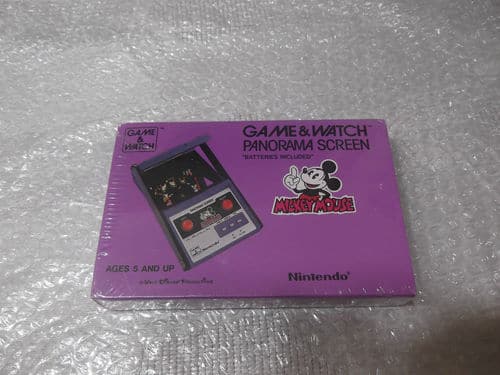 This is one of the rarest models of Game & Watch around. There were two different Game & Watch models produced under the name “Mickey Mouse” – the first of which was a Wide Screen model game later released in the US as “Egg”, and the second of which is the Panorama model pictured above. For those who aren’t in the know, Panorama model Game & Watch units used a mirror system (much like old standup cabinets) to reflect its full color LCD screen.

Other Auctions (this one’s a real good lineup)

McDonalds playland gaming system Nintendo 64Â  – A bunch of working N64 kiosks that were apparently used in a McDonalds Playland. Most of them are complete, TVs and all. Six in total. Note the unusual controllers

SIGNED MGS4 GAME AND PERSONAL SIGNED LETTER FROM HIDEO KOJIMA – A signed Limited Edition copy of Metal Gear Solid 4 autographed by Hideo Kojima, along with a letter sent by Kojima himself to a close business partner

METAL GEAR SOLID 4 GAMESTATION EXCLUSIVE WATCH – Distributed exclusively through Gamestation in the UK. Numbered 34 out of 500