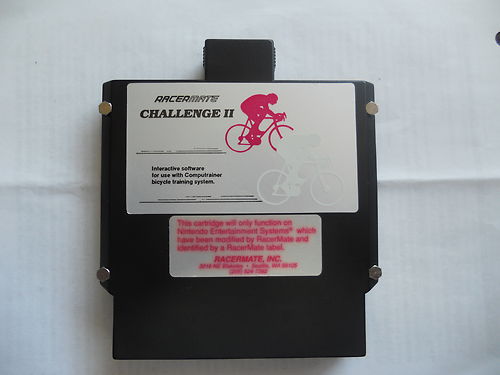 The Racemaster Challenge II was an exercise bike program designed for the â€œComputrainer bicycle training systemâ€ that interfaced with the NES – the user connected a specially included bike trainer (a device placed below the bike to provide resistance settings and to collect data) to the front controller port, and an included handlebar-mounted sensor displayed data and allowed the user to change settings. All of those trims and trappings are not included in this auction, but the loose cart is interesting enough. This has to be the strangest NES peripheral idea I’ve seen since the Miracle Piano Teaching System. Unfortunately, the cartridge is unlicensed and will trip the 10NES lockout chip – one of the non-included accessories likely prevents this. Running it through a Game Genie or the like may render it playable, but the likely solution is either a toploader or de-chipped NES.

SONY Playstation PSX Console System 250GB DVD 2 â€“ Not to be confused with the original Playstation, the rare PSX variant of the PS2 featured a Cross Media Bar (XMB) interface and DVR capabilities.

Sega Mega Drive MEGAJET Console System Boxed + Manual â€“ Predecessor to the Sega Nomad, the Mega Jet was a Mega Drive-in-a-box that was used on airliners in Japan during the early 90’s. Beware of bad capacitors!

Official Nintendo Goldeneye 007 collectors watch from the 90’s N64 game â€“ Not sure if it’s official, but it’s copyrighted 1997 and looks pretty spiffy.