Despite all theï¿½ ridiculousï¿½ sale prices I have seen this year, there have only been a few auctions that managed to truly get me excited. This auction will be an addition to that list.

More so than any other system, the 2600 has had a lot of unconfirmed games. Games which areï¿½ referenced somewhere, but have never been confirmed to exist. Evenï¿½ Chase The Chuckwagon fell into this category when 2600 collecting was in it`s infancy, and tons (relative) have shown up since them.

Red Sea Crossing was in the same boat, and thought to never exist until five years when one surfaced at a garage sale alongside another rarity, Music Machine. Even after the buyer posted these online, there were skeptics. That was until an advertisement was dug up by an eagle-eye collector on AtariAge. This advertisement was then confirmed to exist by many others who physically scoured local libraries to find a copy of the religious magazine that contained the ad. More ads popped up and it was confirmed that Red Sea Crossing did, in fact exist. Like Music Machine, it seemed this saw limited release only through religious outlets. 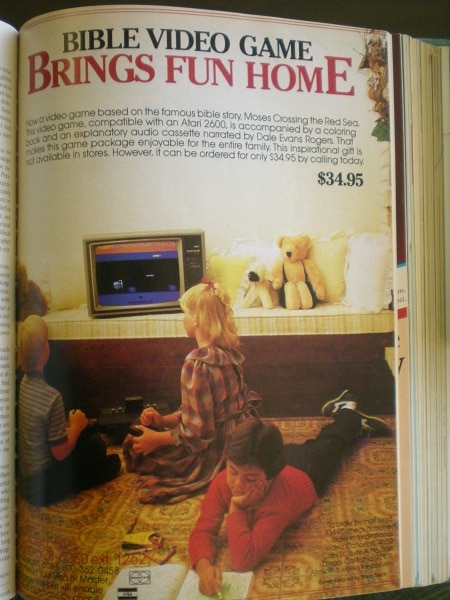 This was five years ago and ever since the owner has toyed with selling the cartridge. Recently though, a second copy has popped up at Medium Bob’s Curiosity Shop in Philadelphia. They have since recorded themselves playing the game, providing proof of its functionality, which is more than the owner of the original copy had done at that point. Their copy is in better shape to boot. So far they say they are accepting offers, but have made no real effort to sell it. My guess is they`re riding the wave of publicity to try to get some traffic into their store. Smart move, and we`ll probably see it actively sold at some point in the future.

This second cartridge has presumably prompted the sale of the first. The reality is that the first sale will probably fetch more than the second, especially considering there is high demand for a reproduction of this undumped game.

It gets more interesting too. Theï¿½ originalï¿½ programmer Steve Schustack was tracked down back in 2007 by a poster on AA. Since Steve programmed the game almost 30 years ago he didn’t remember much about it. At the time he it was not much of a priority and was very surprised that anyone was interested in “obsolete technology” like the Atari 2600.

As far as the game itself, he doesn’t remember where he had the cartridges made. He advertized the game in religious magazines, not gaming magazines and made about 500 copies of the game, but didn`t know how many were actually sold. He figured he might have some unsold copies in storage somewhere, but finding them would take some serious digging (which he is not interested in doing unless there was serious interest in purchasing them).

He also indicated he didn’t want the ROM dumped as he considers it his intellectual property. He recognized that this day and age, he certainly cannot stop people from doing what they will, but he’d prefer if the game were not circulated.

Maybe he has copies, maybe he doesn’t. But after this game sells for thousands he will have a lot of motivation to find them.

This climbed to over $5000 within hours, so it will be interesting to see how it plays out.