Rocket League isn’t some average FIFA wannabe soccer simulator that swaps football players for futuristic cars. It’s actually quite addictive and will grow on you with every match you play. The game is best described as The Perfect 5 Minute Break, Rocket League is fun, charming, and most importantly, it’s simple. Everyone can play it, so don’t bother finishing the tutorial. Trust me, you don’t really need it! Just read this GameSniped video game review and you’ll know how to play the game along with what to expect from it.

What you need is to relax on your couch and play with a few friends after a hard day at work; it has split-screen, and it supports 4 players at once. There aren’t that many split-screen friendly games out there, and Rocket League offers a welcome breath of fresh air. 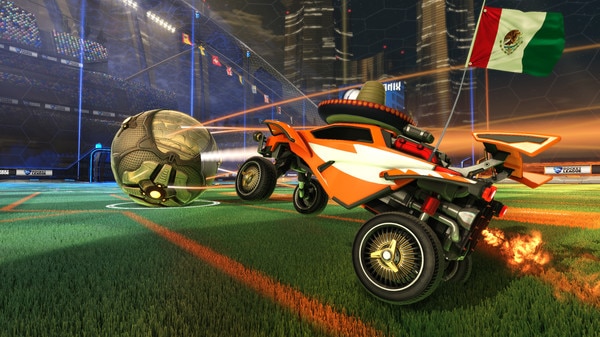 It doesn’t have a story. You just jump into the game, and brawl with other players across the world (or with bots). Rocket League focuses on teamwork, or so you might be inclined to think at first glance. In an ideal setting, each player knows where to stand, and what to do. Unfortunately, almost everyone has a trigger happy finger, and wants to be the goal scorer of the match. This isn’t to say that going the extra mile for a decisive pass isn’t worth it. The game rewards players that prove to be more team oriented, rather than selfish individuals. If you block a goal through a fancy maneuver or something more basic, you’ll get points.

This soccar game is fairly simple: you drive the car, you hit the ball into a net, and you score points. Don’t have the ball? Then defend; go get the ball, and repeat attacking until you blow them to smithereens. No. You aren’t equipped with weapons, but you can destroy other cars by ramming into them. Enemy players can also do that, so be cautious when you see them getting too close for comfort. I also want to take a moment and thank Psyonix, Rocket League dev, for the instant respawn system they put in place.

Yes, you do accumulate points for destroying other vehicles, but don’t let this go to your head. The point of the game is scoring goals and winning, not destroying the opposite team Carmageddon style and leaving a trail of wrecked cars in your wake. The point system reflects this design decision. 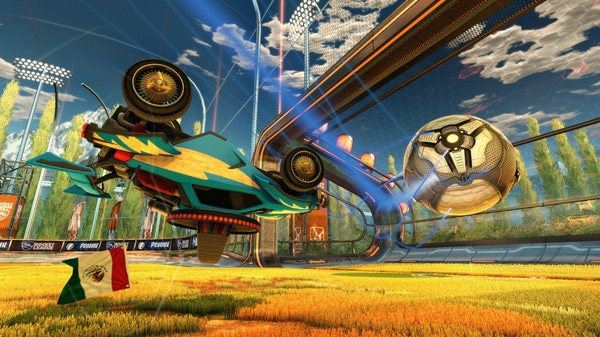 Rocket League play modes consist of one versus one duels, doubles, 3vs3 matches, and the chaotic 4vs4 where memories of senselessly kicking a ball when you were three years old come to mind. But still, there’s order in chaos.

We’ve encountered players across gaming forums who complained that they got bored after a day. While it can become quite repetitive, the driving is buttery smooth. Steering your vehicle across walls and on the ceiling gives a little bit of an adrenaline rush.

You can jump, and you can dodge – both of these actions are effective tactics used in defense and offense as well. You can even use boost to jump higher and longer for exceptional situations when the circumstances call for it.

Certain markers will pump up your boost meter, which you can use to get back to your side of the field super-fast, just in time to block a shot or to ram into other players bringing them to their untimely demise.

Vehicles feel light, but at the same time powerful. The ball is big, fat, fluffy. Hitting it proves to be quite satisfying – like softly punching a bean bag.

Ranked matches are available only online, and only for duels, doubles, and 3vs3.

From the get-go, you’ll notice that the game focuses on playing with actual people online or through split-screen. The A.I. is quite responsive, but playing with bots will prove, in the end, boring as hell.

If a player drops mid-match in an online game, a bot immediately takes its place. Also, players don’t have to wait in long cues to enter a game session. You’re in and out of the lobby in less than a minute.

Regardless of the platform you play – PC, or PS4 – you will be teamed up with players across the world. It features cross platform play. Although, the Rocket League PS4 version is a little bit behind the PC one, graphics wise, but it’s hardly noticeable. As far as I’m aware, I still haven’t seen any mention of an XBOX 1 port which is a bit of a shame.

I’ve only played the Rocket League PC version which this video game review is based on. I haven’t encountered any serious issues that should put a dent in your gaming experience besides some basic lagging. 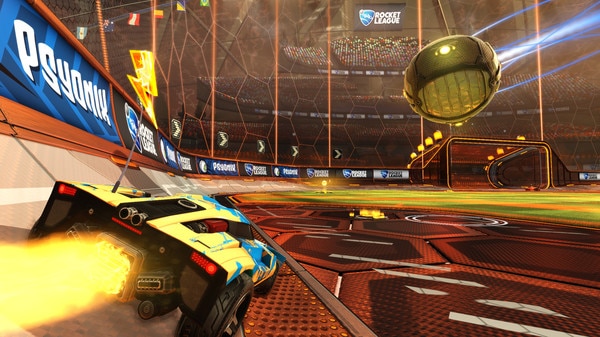 Whether you play offline, or online, you can unlock new cars, and upgrades. Features include fresh buckets of paints that can be sprayed on your car to give them a fancy new look, shiny wheels that assure your position on the field as that guy who’s way into the game, and hats for your vehicles.

Upgrades are just for changing visuals and don’t impact the game experience in any other way. Well, you may feel inclined to ram a player just because he made his car all yellow…

Note: A major Rocket League update is rumored to be on the horizon which will address a couple of issues regarding the game’s servers not running well. Bear that in mind in case you’re experiencing any in-game issues with lag or connectivity.

It’s quite addictive. However, playing with friends is so much more satisfying than playing with bots. So, the single player portion is left a bit wanting. But, this game was never really intended to be played solo. There’s something about gathering your mates in your flat, and yelling at each other that makes this game in particular much more enjoyable.