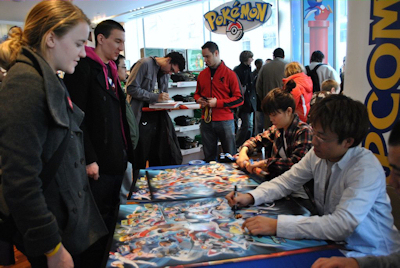 Me and a few friends went to the Tatsunoko Vs. Capcom launch event at Nintendo World today here in New York City. It was a fairly small event, nothing big and nothing fancy. They held a competition to win a free copy of the game before it comes out on tuesday January 26th. Ryota Niitsuma, producer of the game, was there to sign autographs for fans.

Capcom is one of a few third party publishers on the Wii who brings quality titles in the U.S. They recently spoke to Gamasutra about having difficulties finding success on the platform. Chris Kramer, Capcom senior director of communications and community, said that “If you’re not Nintendo, it does seem harder to make money on the Wii today compared to the PS3 and the Xbox 360. It’s a very tough market to crack and is ever-shifting.” Sad but very true.

Here are some other pictures from the event.