So, you probably thought the Nintendo Wii was the first interactive console with motion controls. You probably thought its innovative ideas revolutionized the gaming industry as we know it. The Wii is a completely unique console that influenced and changed it peers, right? Wrong. In this post, Xavix Port: The Original Wii, we will examine the Xavix Port and how its concepts would continue on to influence Nintendo’s all time best selling system. 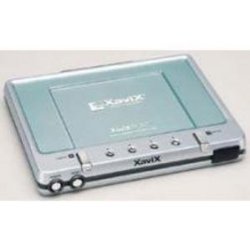 The Xavix Port began life as a concept from SSD Company Limited. SSD was originally conceived in 1995. The company’s founders hoped to bring about innovative technology into the world. SSD is based out of Â California. The acronyms in the title, SSD, stand for Shinsedai. In English, that translates to “new generation.”

Of course, the crowning flagship of SSD is the Xavix multiprocessor microchip completely designed from the ground up by SSD. This special chip powers the Xavix Port console and its movement based gaming system.

At first glance, you would be forgiven for incorrectly assuming the Xavix Port is a unrefined clone of the Nintendo Wii. However, this console made its debut two years before the Wii was first released globally. Â The console functions much the same way as the Nintendo Wii and its stock game, Wii Sports. Basically, you purchase the system, which is rare but shows up on Amazon/the ‘Bay. Unlike the Wii (and other consoles on the market at the time such as the PS2), Xavix Port does not use discs. The console runs off cartridges and their related accessories. For instance, baseball comes with a plastic bat controller, boxing comes with a pair of gloves. You purchased these accessory/cartridge combos separate from the actual console. Then, the characters on screen mirror the way you move your accessories on the respective game. Here is a list of games released for the console: bowling, tennis, baseball, golf, powerboxing, Jackie Chan Fitness mat, bassfishing, lifestyle manager, eyehand coordination, and Music&Circuit.

Xavix was sort of an abandoned console. The controls on these games could be somewhat clunky at times. And the console’s sensors worked best by sitting the console on top of your box television (something that doesn’t quite work with our newer style flat screens). The Wii may have stolen these ideas wholesale in Nintendo’s quest to crush the competition, but they also perfected (sort of) the motion control of the games. But, still. You don’t purchase something like this to actually play the titles on the regular. You purchase it to invest in a rare, unique, unsuccessful console which will be worth a lot of money 30 years from now when there are virtually none on the market. This console is an important (albeit forgotten) piece of gaming past. Don’t expect to be blown away by the games, visuals, or controls. Instead, curve your expectations for something funky and new. The Xavix is a refreshing idea that deserved more than to just be stolen by Nintendo and thrown to the wayside. What’s really could have been cool is if Nintendo had hired the SSD designers to work for the Wii and WiiU. But, such is life. Filled with what if scenarios and possibilities.

If you’re interested in getting in on this unique piece of gaming’s past, check out these links below. After all, it sure isn’t sold by the manufacturer anymore! And you really should be interested if you’re a collector.

J-Mat – This one seems to be a particular favorite