Hi all, Kim here. I hope everyone enjoyed their long Independence Day weekend. I spent part of my weekend looking for good stuff to share with all of you, and I did not come up empty handed. This Overwatch statue I found is pretty interesting.

Specifically, this Overwatch Tracer Statue is the original version 1 and has been discontinued by Blizzard. In case you’re not aware, Tracer is one of the Overwatch characters and a fan favorite. Check out this video to tell you everything you might want to know about Tracer, aka Lena Oxton. 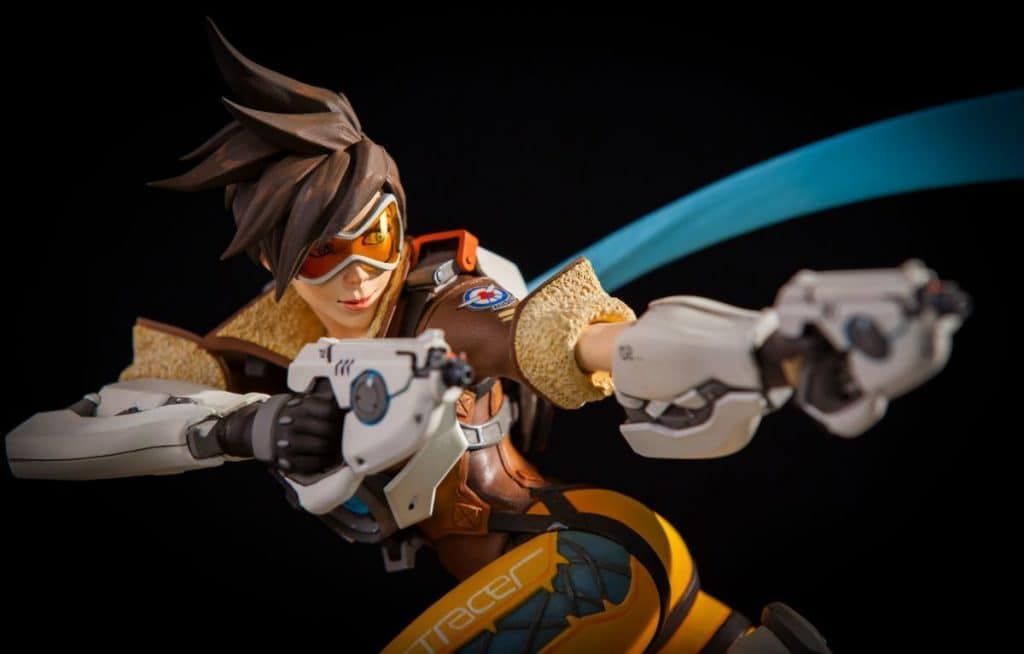 Blizzard recently release this game back in May 2016, so it hasn’t been around too long. It was a big deal at BlizzCon 2016 where this statue first appeared. It’s always a good idea to get your hands on these collectibles when you can. It sold out on the Blizzard site and people all over the boards are talking about how hard this is to get. It’s already valuable so you can imagine how much the value will increase as time passes. If you a serious figure collector, now is your chance to invest in a serious collectible.

Here’s the description of it directly from the Blizzard website: Sculpted by staff Senior Sculptor Brian Fay and painted by Senior Illustrator Laurel Austin, no detail has been lost in recreating Tracer’s gravity (and time) defying action. Suspended mid stride, Tracer features prime, transparent energy effects and goggles, and is underlit by the illuminated Overwatch™ logo base!

What makes this specific statue even more special is that this is the Version 1 Tracer statue. Version 1 was replaced after people noticed and many complained that the face looked different or strange (some people were a bit harsher in their descriptions). Even the sculptor stated that the face was messed up. So now the version 1 Overwatch statue was replaced with version 2. eBay is one of the only place where you can find either of these items considering how rare they are. Check it out here.

On the subject of collectibles, here’s some more good stuff: