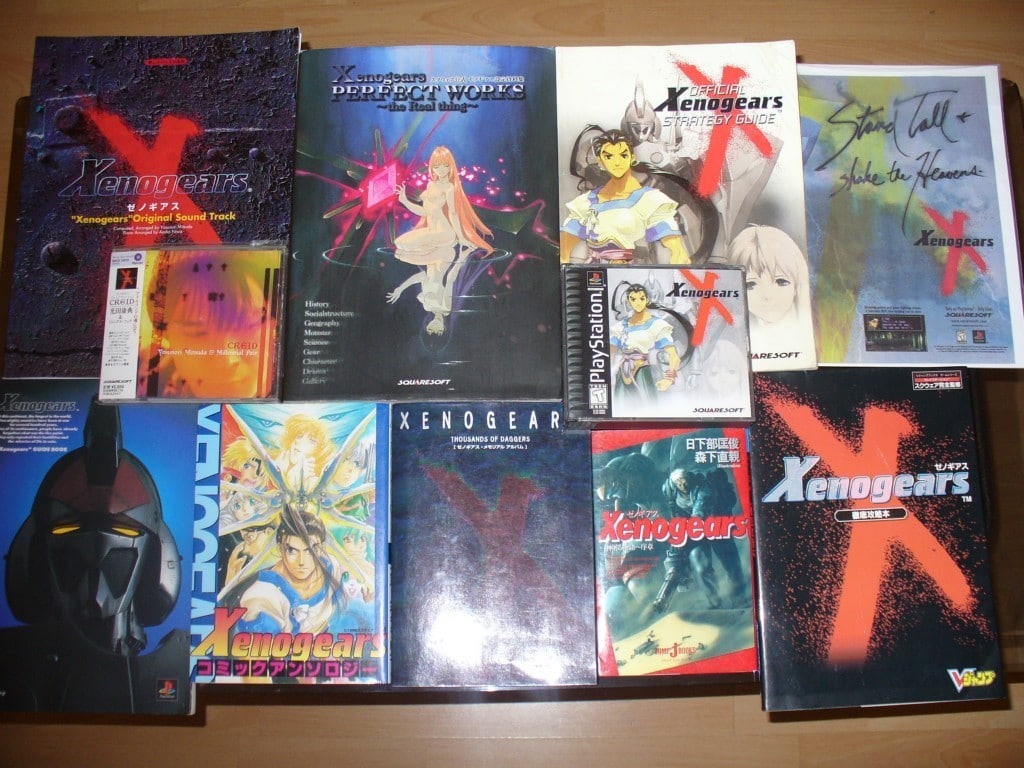 Xenogears, the cult classic 1998 PS1 RPG by Squaresoft, has always held a special place in my heart as an RPG that raised the bar for storytelling in video games. Unfortunately, little Xenogears merchandise exists, and that which does exist is poorly documented.

Naturally, then, this collection piqued my curiosity. In addition to the game itself, it includes a broad array of items – the arranged “Creid” version of the OST, the Xenogears Perfect Works art/lore book, posters, comic anthologies, a piano book, and more. You’ll never likely see so many Xenogears items in one place again, due to the game’s growing obscurity.

Xenogears Limited Figure Fei Square Millennium Box Playstation Game – One of the only major items missing from the above Xenogears lot. A version of the game bundled with a large figure of Bart and a smaller SD figure of Fei. Another version (red box) with an Elly figure exists. Price is reasonable, but not a deal

Nintendo 64 Clear Orange Console Daiei Hawks Edition – One of the more famous rare N64 variants, only sold at Daiei stores in Japan for a brief time. From the pictures the console appears legit, but always be wary of fakes stiched together from orange and black N64s

Mario Photo Paint N64 NINTENDO Smartmedia – A spiritual predecessor to the Mario Artist games on N64DD, this N64 cartridge has a slot for “SmartMedia” cards (Toshiba-created memory card for digital cameras), in order to allow the player to import their photos

Metal Gear Solid L.E. Premium Package – The definite package for MGS1 on the Playstation. Includes dog tags, an artbook, the soundtrack, and more, all in a stylish box

Twin Stick Controller Dreamcast JP – The only TRUE way to play Virtual On on your Dreamcast. The shipping is steep, but the price is ridiculously low. Act fast!

NGCD-NEO GEO CDZ Black Console System – This hardware revision of the Neo Geo CD dealt with the previous system’s agonizing load times by upgrading to a 2x CD-ROM drive and including more cache. Careful – prone to overheating, so read guides on how to keep your CDZ in shape if you pick this one up