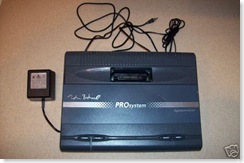 You are bidding on an ultra rare Atari 7800 Signature Series Console.

This is one of 10 to 20 prototype grey Atari 7800 units featuring the “Nolan Bushnell” signature, “ProSystem” in the center with “Signature Series” on the right. There is no Atari Logo on the front, but it is featured in the bottom of the case.

This system was never mass produced and very few of these 7800’s were ever offered. This system features the pro-production plastic housing that is only held together by front screws.

I powered up the system and it has a very nice Green LED on the front. Plays game cartridges great! System plays 2600 games and uses 2600 compatible controllers (not included). Comes with built-in Video Cable and Power Supply.

Condition of the system is used. Has a few scratches here and there but will make an excellent centerpiece to your rare vintage Atari collection.

Last one I know of was on eBay in 2006,  and went for over $1,027.00. That one was actually a white version, and included a much more detailed description: 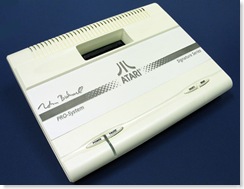 A few years ago, we were contracted to assist in the production of NEW Atari 7800 units. They were to be emblazoned with Nolan Bushnell’s signature, a large Atari logo on the front of the case, and "Signature Series" over on the right.

Unfortunately, this project never entered production, and very few of these 7800’s were built. In fact, the 7800 pictured in this auction has one of the pre-production plastic housings, with the guts of a production 7800 unit inside. While new 7800 motherboards were designed (by us!) for this new product, very few of these motherboards exist, and only one board was ever populated.