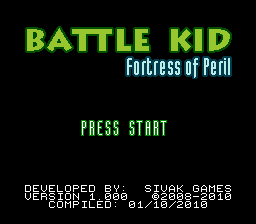 Homebrew: a term that defines a video game Battle Kid Fortress of Peril that was created for a specific platform, by an individual or team of developers.

Some homebrew games can be great, while others fall squarely short of expectations. Most of the joy, though, for the developers comes from simply completing the project. Think about it: if you’re just an average person, or video game hobbyist, wouldn’t it be neat to make your own game and see others play it?

Indeed, the homebrew community has never been stronger, and we’ll be seeing more games for the years to come.

But today, we’re going to be talking about a specific title that was created back in 2010. That game? Battle Kid Fortress of Peril. Before we dive into our review though, let’s take a brief tour on the history of homebrewing.

Battle Kid Fortress of Peril is a Special Homebrew Title 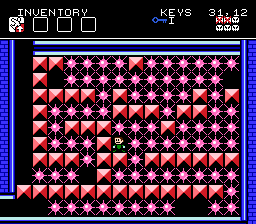 One look at the game’s box art and it’s safe to say that the game belongs on the NES. Let’s be honest: when a game is titled something odd like Battle Kid Fortress of Peril, you know it calls home on a retro console.

The original release of the 2D platformer was back in February 2010. Instead of the standard digital release onto an emulator-based file, the game did something a little different: a cartridge-only release. The team behind it was developer Sivak Games, and publisher Retrozone for NES, with the box art being designed by the popular YouTube personality Larry Bundy Jr.

The flip side of this is that the actual cartridge is a translucent green, paying homage to the days when Nintendo would manufacture different colored games for specific titles. This also makes the game highly-collectible to any NES completionist.

Of course, there has been demand for the game to be released via a downloadable version, but the developer has stated that it probably won’t happen due to a contractual obligation Sivak has with Retrozone.

What started as a passion project quickly became much more for Sivak. Will the first major platformer released for the NES since 1995 be a hit, or will it fall at its own expectations?

The Standard Story of Find and Defeat

The overview of the game makes it seem like a very intimidating adventure from the start. Totaling 550 rooms, 30 enemy types, and eight bosses, there is a lot to do within Battle Kid’s walls. That might sound tough, and honestly, it is.

Plot wise, the game centers around an old building that an unknown group has gained control of. Timmy must infiltrate that fortress–Fortress II’Akab, nicknamed the Fortress of Peril– to stop the group’s plans of developing a “supermech” from the magical properties. All of this is presented as text at the beginning of the game and gives a reason for the madness.

Even though there are five different difficulty settings, the game should be played on its normal difficulty. Sivak mentioned that, while being an avid NES collector and gamer himself, harder games were something he held dear to his heart. So, crafting a game where death is one hit by anyone made sense. The difficulties, when stepping up to harder gameplay, take away continues, and the Unfair difficulty is particularly, well, unfair, giving you no continues and no password saves.

He tried to alleviate some of the hardship by giving players save states to load from, and this does help. There is also a password system in place to access secret levels, and the saves are easily accessible when needed, which is quite often.

Just make sure to write down your save, or else you may not remember it!

Timmy Versus Everything Else

The gameplay mechanics are designed around a main character, named Timmy, who possess a projectile weapon that enables you to defeat enemies. Through all the different rooms, you’ll have to guide Timmy around in typical 2D platformer fashion, making sure to time your movements are the different enemies. Some may shoot at you with a secret eye socket, while others are simply there to force you into a different area.

In order to advance through the game itself, you must find different keys to unlock specific areas within the fortress. The keys you can find also provide enhancements to Timmy, which are necessary to overcoming specific obstacles. This was nice, as forcing the player to explore is always a plus.

There was, originally, in with the first version of the game, a few secrets to be found. For starters, there was a glitch in the game’s code that allowed the player to become invincible. You can imagine how this would disrupt the original intentions of Sivak. The other bug had to do with sound implementation but wasn’t game breaking.

Overall, the controls felt tight, and it seems the time put in gave way to an easy-to-handle game. While certain retro games can’t hold up due to controls, being made in 2010 gives Battle Kid Fortress of Peril an edge in appealing to the new generation of gamers. 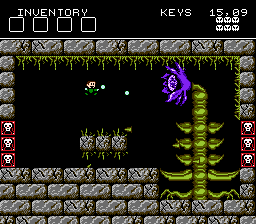 While it’s fine to have excellent gameplay that isn’t too repetitive, a game must have good enough graphics and sound to keep someone interested. Thankfully, Battle Kid just does that.

Attributing this to being created within the confines of modern, not archaic, technology, this NES game looks great, and clearly work went into providing a unique sound profile. The sprites used for the enemies, level design, and bosses are exquisite. All of the animation is fluid, and the game performs remarkably on either a PC, or the actual NES system.

The sound, on the other hand, is exceptional. It rattles the brain to think about how someone, by themselves, could come up with sound design for a game that all fits together like pieces in a puzzle. There are specific sounds for almost every action, and all the bosses are represented by that fact.

From the opening title screen, you know the sound is legitimate.

Are the Bosses Actually Challenging?

After navigating through a few different rooms, you’ll find yourself within the first of eight boss battles.

The game is engaging enough to take a solid amount of time too. As if the content wasn’t apparent, the length of the game is about 18 hours strong. That is a lot of gameplay and deaths thrown into a small package, only adding to the value here.

All of the bosses are unique, and truly require patience to master and defeat them. From Owlbot, a giant robotic owl, to the Seahorse Turret, they’re all different. All the bosses also have names, which is neat, meaning fans don’t have to come up with their own. Being different also requires the player to use specific moves and calculations to beat them. The bosses also have of sense of scale to them.

The more you die the more you should be able to memorize about a boss or level. This will come in handy, especially with later bosses, where you fight underwater or against multiple enemies at a time.

When it was all told, the game is a technical marvel.

By now, you know that the game is made in a physical, transparent green cartridge. This is done by taking all new parts of the cartridge and putting them together via a new distributor. Thus, no old cartridges are harmed in the making of the game.

This was important to Sivak, so that’s what he did. The game is still available for purchase today. At a very reasonable price, the price seems pretty good for the game you’re getting.

The Legacy of Battle Kid

Developer Sivak Games went on to make a second Battle Kid game in 2012, titled Battle Kid 2: Mountain of Torment. Taking a step up from the previous title, the new game featured 650 rooms, 13 total boss encounters, 25 enemies, and 42 handmade music tracks. Needless to say, this wouldn’t have been doable had the first game not been successful.

Of course, the game was released as a physical only copy as well, having a fully teal transparent shell. The game design is a continuation of the original, meaning the adventure carries over.

Why does this all matter? Well, to see a homebrewed release go on to receive such a high following is impressive. Moreover, the fact that the developer spent a solid amount of time–two years– polishing and finishing the game. Sivak wanted to create an experience that was like other platformers of the time it was set.

He did just that.

It has also been noted that there is a third Battle Kid game in the works, though no official details have been released yet.

Why Do People Homebrew the NES

The NES, home to some of the games that have since gone on to spawn countless iterations. There are also some games that, when released, weren’t highly thought of. It was Nintendo’s baby, and they wanted nothing more than to make most of their own games for it.

Yet frequently, especially in recent years, more developers have ramped up their game creations for the NES system. Why is that?

The system’s architecture allows most people the simplicity of creating a game in a reasonable timeframe. Rather than take up two years of someone’s life, an NES game can be made in a matter of weeks, or even hours. The only drawback to homebrewing on the NES is that the physical cartridges are difficult to create.

Also, while it may seem interesting that a console would allow these fan-created titles to play on the system, Nintendo removed a lockout chip further into the NES’s lifespan. This made it easier for players to have games from all around the world, including the ones made in basement. 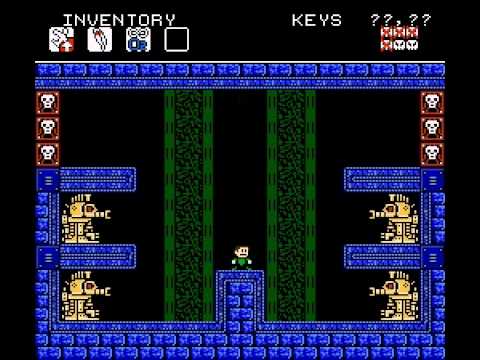 While it may seem impossible to want to buy a cartridge in the digital era, Battle Kid Fortress of Peril is a fine game, and one that any enthusiast should play.

The idea that it’s a difficult-but-not-too-difficult platformer with great looking graphical animations, solid level design, an intriguing story, and just outright fun on the NES. Passion is why people get lost in video games, so it’s always good to see something come from that.

Seriously, the game holds up very well, and goes to show you the genius that some people have. The ROM is available online now for emulators, so it’s not terribly hard to find. If you’re a fan of 8-bit games, the NES era, or competitive platformers, Battle Kid Fortress of Peril should be on the top of your list of games to play next.