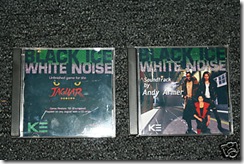 Black ICE\White Noise was supposed to be the most advanced cyberpunk adventure game of its time, on the most cutting edge game machine on the market. Only it didn’t work out that way. Atari’s Jaguar game platform was a financial disaster, and the company went out of business before the game was finished.

It’s often been compared it to later games such as Grand Theft Auto. It was intended to be one of the first true “sandbox” games .

The game itself is a third-person action/adventure game set in the near future, a cyberpunk future in which gangs run the streets unchecked, and huge multinational corporations battle each other for power and wealth. It is into this world that the player is thrust, to fight the corporations and gangs, and to bring forth a brighter tomorrow for humanity. At least that was the intent, but due to the incomplete nature of the game, it is impossible to be exactly sure. Either way, the Alpha does have a lot of content, a vast city to explore, at least one complete mission and several parts of missions, basically a good deal to do and see.


Now, here’s where things get confusing for me. I’m not a Jaguar collector, so I can’t comment on the accuracy of the statements by the seller. I also can’t comment on the price. Seems pricey, but I’ve seen less rare games sell for more. Depends on how much something like this is desired by the Jaguar community I guess. Also, I’m not sure what the release numbers for this were. The auction doesn’t state and I can’t find it elsewhere. Auction sates:

About a year ago or so, the original programmer (or possibly lead designer?) on this game made available in extremely limited quantities an Alpha Build of the game, as it was in its closest to complete state.  He was also making a soundtrack cd, with all the finished music from the game at that point.  He sold a very small handful of these on Ebay, with the prices going insanely high.  I was lucky enough to buy both a copy of the game, as well as the soundtrack.  Keep in mind, this is from the VERY FIRST RELEASE THE ORIGINAL

Now, I’m trying to get out to Vegas for a wedding, so this incredibly rare piece of video game history is going up for sale.  I don’t want to sell it, and if I can’t get a reasonable amount for it, I’ll just have to pass on the wedding.  😛

Anyways, check out the pics, they show better than I can describe.  Again, this is an Alpha Build of the game, amazingly rare, with probably less than two dozen existing in all the world.  Check it out, and thanks for looking.

***I have had some questions about this item, and I wanted to make a few things a bit more clear.

1.  I bought this game directly from the person that owns the distribution rights – this is NOT some copy I made or any such thing.  This was bought direct, and is now being sold as a used game – I’m in no way claiming distribution rights to this title, nor would I for any other used video game I sell here on Ebay.  This is the ONLY one I own (God I wish I had bought 2 back then!)

2.  This is an Alpha Build of the game.  What this means is, the game is not finished.  I don’t want anybody to bid on this item, expecting to see a finished product – it is not.  Please, if you are interested in how far along they were in the development of this would-be monumental game, check out the jagcube website I listed above in the description.  It shows a lot, and talks about various elements of this game – it even has a lot of pictures, which is rare to find. There are many elements of this game that ARE in, but there are many things missing too.  It IS a cool look into the development cycle of a high end game, and it IS exceptionally rare.

3.  This plays on any Jaguar CD system, this does NOT require any type of modding or separate card or cart.  Just put it in, and off you go.  This game has come direct from the game’s creators – this is not a copy in any way shape or form, and it also includes the manual they originally included.

I can also find info that says that there were Combo Packs released, limited to only fifty copies. This not only includes the game CD-Rom itself, but also a dust cover, and a second CD-Rom containing a Strategy Guide, some vintage web site material, and a collection of various development tools and source code for the Jaguar. The Combo Pack comes in a standard DVD case, the kind of case that a Playstation Two game might come in. Also, the game is unencrypted, and as such requires a bypass cart to use on a standard Jaguar CD player.

This auction however, is obviously something different.

The game is also available legally from the copyright owner, but I’m unsure if this is just a download, or they ship the cds out to you. The site itself seems to me that it would be physical cds, but sites that link to it imply that it is a download.

Bottom  line is this looked interesting to me, so I figured I would share it.