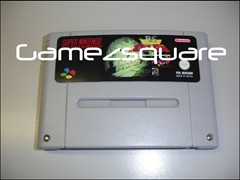 BS Zelda no Densetsu was a game released for the Satellaview attachment for the Super Famicom in Japan. It was based on the original The Legend of Zelda for the NES. BS stands for Broadcast Satellaview (commonly referred to as the BS-X). Using this add-on gamers could download the game from the satellite and save it onto either the base unitâ€™s memory or onto a BS-X Special Broadcast Cassette.

The gameplay was largely unchanged from the original NES title but a few differences exist which make the experience distinctly different. One of these differences is that the maximum number of rupees allowed a player was increased to more than a thousand (rather than 255 as in The Legend of Zelda). The overworld was altered from an 8 by 16 map to an 8 by 8, although an effort to make Map 1 relatively comparable in terms of general landscape features to the overworld in The Legend of Zelda is apparent 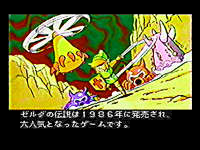 The game was played in real-time. An onscreen clock showed the current time, and at various times on the clock certain events would happen. The game pauses for a moment before making a change. Sometimes the enemies are killed or stunned, sometimes a fairy appears, and occasionally the player is granted unlimited quantities of one of their items for a limited time. Bombs, boomerangs and candles can all be auto-upgraded this way, and will never run out of ammunition until the clock reaches the ending value, at which point the playerâ€™s bombs are returned to the amount they had before the unlimited amount was activated, or the boomerang will downgrade, or the candle will turn from red back to blue.

The game was divided into four weekly episodes. These episodes were played live, at the same time as a video game tips show was running on the satellite network (it probably contained ads and such to promote the games currently being played). The download time for each episode was typically around seven minutes.

The game also featured live voice.  When the clock hit certain times the game would pause and display Japanese writing onscreen (that apparently reads “listen”), and the player would hear a narrator give a hint or suggestion. It is unknown as to how long these tips were, but under emulation the pauses are about two to three minutes long. After that time the text disappears and gameplay resumes as before.

Due to the live nature of the game in its original incarnation, the game’s ROM could not be played properly on emulators. Many hackers have since created patches that removed the game’s download pauses and time limits, pieced together all four episodes and given the game a title screen and file selection screen all of which has ultimately allowed BS Zelda to be played as like a traditional, non-Satellaview game.

This seems to be the case here as someone has opted to make a homebrew cart of the hacked rom. 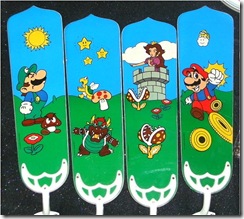