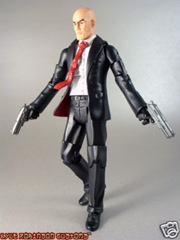 First off, I have to say that Hitman was up there with the best video game movies I’ve seen. I meant to review it when I first saw it, but it slipped my mind somehow. Either way, watch it. It’s good.

This figure lives up to that too, being more based on the movie character’s look than the original Hitman (in my opinion). It works too, as the figure looks killer.

He comes with two pistols, machine gun, shotgun, garrotte and is fully posable to boot.

If you’re not familiar with the concept of custom figures, basically someone takes existing action figures, rips em apart, mixes then together, maybe builds a few new parts using sculpty or something similar and repaints it. In the hands of an experienced builder, what you end up with often looks better than something officially produced.

Check the auction for better pictures.