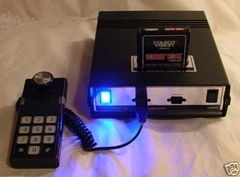 This is one of the best mods I’ve ever seen in terms of actual functionality. From the auction itself:

Up for auction is a custom built Mini ColecoVision video game system. This modded console was built around an original ColecoVision PCB that was cleaned, refurbished and upgraded, and then transplanted into a customized mini console case. The Mini ColecoVisionâ€™s footprint is more than 50 square inches smaller than that of an original ColecoVision, and weighs in at more than 1 pound less than its big brother. Because this console started with the original ColecoVision platform, it is completely compatible with any and all games and controllers specifically made for use with the ColecoVision. This first ever available 2nd revision Mini ColecoVision console has the rare distinction of being serial numbered â€œ001â€. Included with this console is a brand new ownerâ€™s manual that has been written specifically for the Mini ColecoVision and details all its features and operating functions. The manual has the matching serial number of its console, and has been hand-signed and dated by its creator on the inside rear cover. This video game system also includes a refurbished ColecoVision hand controller, a Donkey Kong game cartridge, a power supply, and a six foot, gold-plated, A/V cable.

An upgrade over the ColecoVisionâ€™s original and often less than desirable RF output; this will allow you to connect the Composite Video signal from this console to any monitor with a Composite Video input jack. This output offers a video signal greatly improved over a once standard, but now outdated RF signal. The connection for this output is made through the industrial-rated, gold-plated, and color-coded phono (RCA) jack on the rear of the console.

An upgrade above even that of the Composite Video output, this will allow you to connect the S-Video signal from this console to any monitor with an S-Video input jack. While Composite Video uses only a single wire to transmit all of the video data, the S-Video standard splits the data into two lines, one for Chrominance (color) and one for Luminance (brightness). This allows for higher a bandwidth, and a picture that is clearer and more pure than that from the Composite Video signal. The connection for this output is made through the industrial-rated, gold-plated, mini-din (S-Video) jack on the rear of the console. 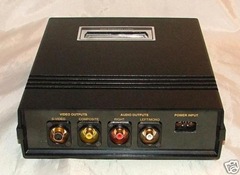 Originally the ColecoVisionâ€™s audio and video signals were mixed and transmitted simultaneously through one RF cable. The new Composite Video and S-Video standards separate these signals and transmit them through their own dedicated lines to achieve a clearer picture and sound. These Analog Audio Outputs allow you to connect the audio signal from this console to any monitor to be used in conjunction with either the Composite Video or S-Video outputs. While ColecoVision games are only coded for monaural audio, two audio jacks have been installed so that sound will be transmitted through both stereo speakers. The connections for these outputs are made through the industrial-rated, gold-plated, and color-coded phono (RCA) jacks on the rear of the console.

The original ColecoVision BIOS setup forced you to sit through 10 – 12 seconds of Colecoâ€™s opening title screen when a Coleco-published game was inserted into the cartridge slot and the unit powered up or reset. After the time delay you could then select the number of players and the difficulty setting. With the new â€œIntro Skipâ€ BIOS chip installed, after the console is powered up, the instant you press one of the controllersâ€™ left fire buttons (yellow button for a Super Action controller), the agonizingly long title screen is skipped and you can continue on to the game. If a button is not pressed, the original title screen will display as it normally would.

The original On/Off switch is one of the biggest problems for the standard ColecoVision. The dual pole contact points and slides corrode, and collect dust and dirt and can cause graphical glitches and garbage to appear on the screen. Even after cleaning an original switch, over time the dust and dirt will build up again and the switch will need to be re-cleaned. These new industrial-rated pushbuttons are now located on the front of the console and feature a blue-illuminated On/Off pushbutton, and a matching black Reset pushbutton. The illuminated On/Off button glows bright blue when the console is turned on doubling as a power indicator.

Besides the installation of the new â€œIntro Skipâ€ BIOS Chip, this PCB has undergone a major overhaul. The cartridge slot has had its electrical contacts burnished, de-oxidized, and conditioned to return them to an almost as-new state. This contact conditioner not only fills in minor scratches in the metal providing greater surface area for electrical contact with any game cartridge inserted into it, but will also inhibit future corrosion from starting.

The VDP (Video Display Processor) is one of the major components with an above average failure rate on a ColecoVision video game system, rendering it unusable. This IC has been replaced with a brand new chip to provide a long life for this console. Also in an effort to help with heat dissipation, every IC on the PCB has been outfitted with an anodized aluminum heat sink to prevent the console from over-heating. In bench tests this Mini ColecoVision internally operates 8 degrees Fahrenheit cooler than a standard ColecoVision.

Link (Pricey, but definitely worth it for a hardcore Coleco fan)