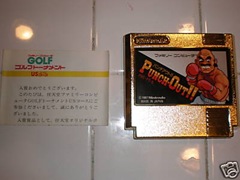 The gold Punch-Out!! Special cartridge was given out as a prize during the Nintendo Famicom Golf US competition. This version of Punch-Out!! was actually the very first release of the game and has some differences from the retail release, including wording, color, and music variations. There’s not even a final bout, the game ends after you defeat Super Macho Man.

I can’t remember what these normally fetch, anyone happen to know off hand?