Not really sure what this is, but I think it’s from a 2008-2009 event. It’s a LE System from the Gillette Champions of Gaming competiton. No idea if this is paint or a sticker, or how many of these may have been made.

From an old press release:

Gillette [PG] and EA SPORTSâ„¢, a label of Electronic Arts Inc., (NASDAQ: ERTS), today announced the Second Annual â€œGillette â€“ EA SPORTS Champions of Gaming Tournament on Xbox 360,â€ the worldâ€™s largest multi-sport online gaming competition that pits gamers from around the globe against each other, and ultimately for the winners, against some of the biggest names in the world of sports, including Gillette Champion Tiger Woods.

The Tournament, which attracted more than 350,000 gamers last year, begins on November 18, 2009 and runs through February 14, 2010. Gamers will be able to compete against other gamers on Xbox LIVE, the worldâ€™s premier online gaming and entertainment service, within their geographical region on several EA SPORTS titles including â€“ Tiger Woods PGA TOURÂ® 10, EA SPORTSâ„¢ FIFA Soccer 10, Madden NFL 10, NHLÂ® 10 and Fight Night Round 4. Winners on each title will have the chance to be crowned a Gillette â€“ EA SPORTS Champion of Gaming at the Final Event in March 2010. At the Tournament Finals, Gillette Champion Tiger Woods, as well as other sports superstars*, are scheduled to take on one of the five Gillette â€“ EA SPORTS Champions of Gaming participants in an EA SPORTS title â€” with the winner claiming ultimate bragging rights.

â€œLast year, our match came down to the final shot. Iâ€™ve been practicing and I am ready to take another crack at this yearâ€™s best player,â€ said Tiger Woods.

The Champions of Gaming Tournament is a global skill-based tournament in which participants compete against other players on the online Xbox LIVE gaming platform to determine winners. The global tournament will consist of one (1) nine (9) part qualification round and one (1) knockout round in three regions â€” North America; Europe and Asia-Pacific. The regional champions of each title will then face-off against each other and compete for the opportunity to play against the sports superstars at the global final event.

â€œWeâ€™re excited to once again provide gamers from around the world the opportunity to face off on some of our most popular EA SPORTS games through the Champions of Gaming Tournament on Xbox LIVE,â€ said Peter Moore, President, EA SPORTS. â€œWhat continues to make this tournament truly stand out from other gaming tournaments is the extraordinary chance to compete face-to-face against Tiger Woods and other sports superstars.â€

â€œLast year, we created the worldâ€™s largest multi-sport gaming tournament and this year, we are looking to make it even bigger,â€ said Peter Clay, Vice President, Gillette Grooming. â€œWe expect even more participants as the gamers play for the ultimate prize â€“ a one-on-one match against some of the top names in sports.â€ 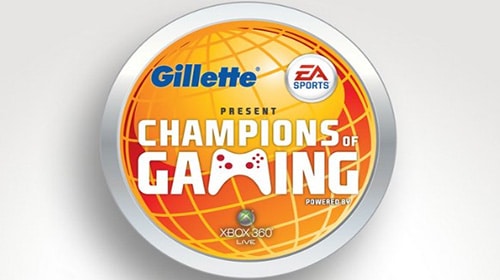