Seriously, I feel horrible for all the future XBOX 360 collectors. So many limited edition hardware releases, and it seems like very fifth game is released in some sort of special collectors edition. A complete 360 set will not be fun. 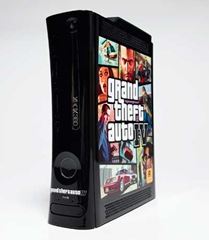 Anyway, M$ just released a nifty GTA IV branded LE console. Basically, an Elite system with the GTA IV boxart branded on the side with high quality automotive paint and a serial number. There’s also a breficase with a bunch of 360 peripherals.

Only 500 were released and them seem to have gone to the media for the most part.

I have just one question however, how come gameSniped didn’t get one to review?