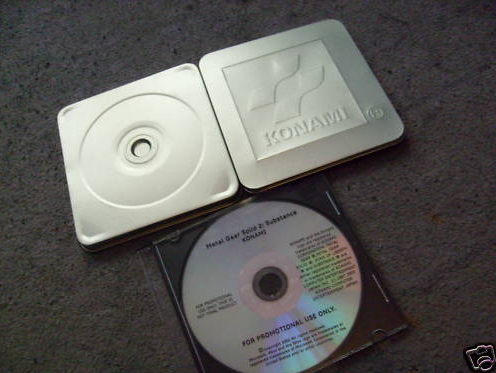 Here’s another rare Metal Gear Solid title. Had to dig this one up from last year when I first saw it. I never really followed through it and I didn’t know how much it ended. But here it is again..

I first found out about this item from this site just from looking through some Metal Gear stuff on Google. This Metal Gear Solid 2: Substance promo had a $1,500 price tag.. According to the UK seller of the one listed right now, the ones who originally owned these claimed that there were only 5 to 10 of these made.

“I purchased this 4 years ago and never used the game so I cannot tell you the region of the game, this was bought from a collector in the United States and ever since i’ve only ever seen 1 on eBay and that was over 2 years ago who claimed they were only ever 5 – 10 in existence!

The game comes complete in a KONAMI steel press tin along with the foam insert and clear promotional disk which reads:

FOR PROMOTIONAL USE ONLY. THIS IS NOT FINAL PRODUCT”