Mirror’s Edge is a pretty interesting game recently released for the 360/PS3 and scheduled to come out in January for the PC. The game has a realistic, brightly-colored style and differs from most other first-person perspective video games in allowing for a wider range of actionsâ€”such as sliding under barriers, tumbling, wall-running, and shimmying across ledgesâ€”and greater freedom of movement, in having no HUD, and in allowing the legs, arms, and torso of the character to be visible on-screen.

Anyway, there is two kinda interesting promo items for the game up on the bay at the moment.

First is this courier bag which I’m guessing resembles an in game item. 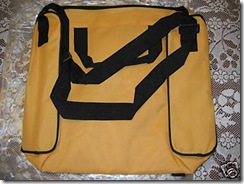 Second is this weird USB Key. Looks like something that might be part of a viral marketing campaign. 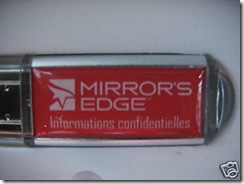