Ok, this is pretty much my personal holy grail. They turn up a couple of times a year, and usually end up fetching over $100.00.

The Nintendo Cereal System was a breakfast cereal produced by a company called Ralston Cereals in 1988. It was trying to capitalize on the popularity of the Nintendo Entertainment System, and promoted two of the most popular games on the NES at that time, Super Mario Bros. and The Legend of Zelda.

The box of the cereal was divided into two sections, one for each game. One side, called Super Mario Bros. Action Series, had fruity-flavoured Marios, Super Mushrooms, Goombas, Koopa Troopas, and Bowsers, and the other, called Zelda Adventure Series, had berry-flavored Links, hearts, boomerangs, keys, and shields.

The cereal has great kid pull by itself, but upped the ante by always including stickers of a Nintendo character and Nintendo “Power Cards” (a set of 12 trading cards) on the back panel. It also had offers to win NES Power Pads or a Super Mario cereal bowl.

I’m so tempted not to post this and bid until my Paypal account bleeds. My wife would kill me though, so it’s all yours. 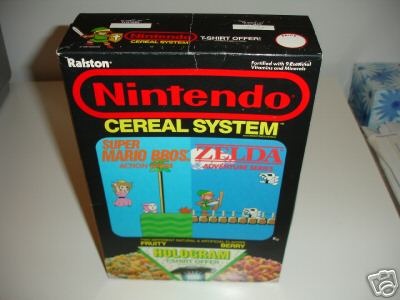 Oh, and the commercial is awesome too.