The Hot Summer contest was a Japan only campaign in 2005. By purchasing a DS unit or two pieces of software (released during the campaign period) for the DS, GBA or GameCube, you could register your products at Nintendo’s Club Nintendo website and be entered into a drawing for a number of prizes.

At the top of the prize list were these DS system. Nintendo drew from the then current lineup of DS colors and then engraved a character portrait onto the top flap. Available were Pure White Mario, Platinum Silver Wario, Graphite Black Koopa, Candy Pink Peach and Turquoise Blue Yoshi. Each style was given away to 200 people, for a total of 1,000 handhelds overall. Shortly into the contest, Nintendo actually pulled the Wario DS and replaced it with Donkey Kong Silver.

There is currently a Bowser Black DS and a Donkey Kong Silver DS on eBay. They’re defiantly not cheap however. No idea what the going rate is though, as none have been sold recently and I can’t remember the price that the last one I saw went for. 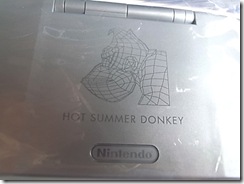 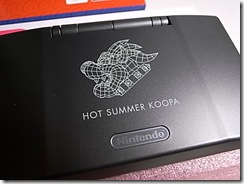