Surprised I missed this until now. I’m going to quote directly from Game Rave (the go to PS1 Source) on this one:

Working Designs created this extremely limited edition set as both an award and promotional item during the 1998 Electronic Entertainment Expo (E3).

When you are brought face-to-face with an Assassin Case for the first time, a literal wall of awe falls over you, as everything you have ever collected, sought after, hunted, and played suddenly comes into focus. There really is nothing like this in the entire US PlayStation library, not even by Working Designsâ€™ own standards. The care and craftsman ship in the aluminum embossed case, along with the immaculate paint job on the GunCon really do stand out. Weâ€™ll break the set into its individual pieces.

1. The Briefcase
Measuring a robust 16 3/4ths by 9 3/4ths by 4 inches, the Assassin Case has a pre-molded bottom tray that has space for a GunCon, a double-jewel cased game, and one official Memory Card. You can actually squeeze a second one in there, but it looks awkward. The inside/top features a point-pattern Styrofoam sheet that keeps everything in place.

On the outside, there are four feet, handle, 2 tumbler locks for the hatches, and the original Japanese logo of the game. So detailed is the embossing you can even make out the silhouetteâ€™s nipple. Two hinges hold the case together halves together.

2. Official Namco Guncon
How do you compliment the ultimate gun game? You give it the best damn light gun available on the PlayStation; the GunCon. Created by Namco for their Time Crisis and Point Blank series, Working Designs took the original creation had had it repainted in shiny gold. The reflections are sharp as ever, though the included letter warns of the paint wearing off via sweaty hands.

3. Official Sony Memory Card
Originally planned to be gold plated as well, it seems that due to production issues Working Designs opted to just coat the gun by itself. Oddly enough, the included memory card is actually the very seldom seen Cherry Red edition. The concept of a gold memory card being abandoned can be verified in the included letter. It only mentions the GunCon by gold color. BUT, several people have gold cards in their set. Seems both were included.

4. Elemental Gearbolt
A full retail version of the game is included, factory sealed. Oddly enough, it still wields the contest sticker proclaiming you could win $10,000.

5. Congratulatory Letter
Included to announce you were one of the coolest people on the planet. The letterâ€™s contents are archived verbatim to the right, in our trivia section.

Less than 50 Assassin Cases were ever created. For confirmed numbers, I believe it is still under 20. 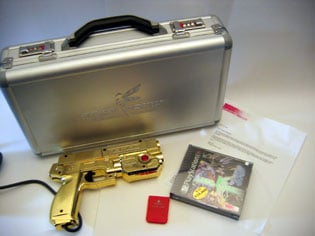