Ok, I can’t find any info about this system. Not even after pulling up old NES pages I have saved that no longer exist. Maybe I’m not looking in the right places, so if you know something, please leave a comment.

Since 1988 when Thin Chen Enterprises (aka Sachen) started churning games out of their offices in Taiwan, NES collecting got more interesting.  The company actually first developed titles for the Asian market under the name of "Joy Van". However, one the unlicensed cartridge market was thriving in the states, their original releases then licensed out to several other publishers. These include publishers we’re all much more familiar with, like AVE (Double Strike, F-15 City War, Pyramid, Tiles of Fate), Color Dreams (Master Chu, Metal Fighter), Bunch Games (Galatic Crusaders), the Australian unlicensed company H.E.S. (F-17 City War, Little Red Hood, Penguin & Seal, Pipemania, Pyramid, Sidewinder), and Hacker International, aka Panesian, (Mahjong, Pyramid) to name a few.

Sachen also went beyond just manufacturing their own games, but got into hardware as well. The "Q-boy"  was a NES and Famicom clone that was produced to play their cartridges.

Up until 2002, the company was still plugging away. Producing pirate plug-and-play systems, original Gameboy Color multi-game paks, as well as nine different volumes of NES multi-game paks which showcased the NES library they created over the years.

To me, I was a huge Sachen fan. In my dedicated NES collecting days, I was intending to collect every 72 pin cartridge and was well on my way. Oddly enough, it seems that isn’t the norm for NES collectors. It seems most collectors have little interest in the set, and don’t view it as part of a "complete collection" like those games of other unlicensed publishers. Possibly because of how it was never complete confirmed (to my knowledge) that they had any formal method of distribution in the Sates. We’ll ignore the possibility that it could be the fact the games are some of the worst ever programmed.

Anyway, enough of a history lesson.

This system as I was saying, is new to me. It sports more of a SNES look than the Magic Boy. Plus I have to say that the window is very cool. 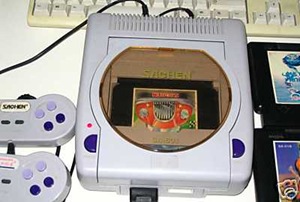 Includes three games and is starting at $0.99.

They also have a lot with several of the original gameboy multicarts available.