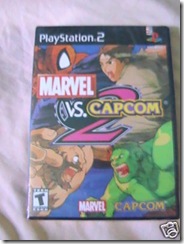 Marvel vs. Capcom is often regarded as one of the best 2D fighters ever made.

The game is the fourth and final in the Marvel vs. Capcom series of fighting games. With the final installment of the series, Capcom simplified the engine so that it would be more accessible to casual players, in order to bring in new players. Originally released as an Arcade game, it was was later ported to the Dreamcast, XBOX, and PlayStation 2.

Soon after porting the game on the PS2 and XBOX, Capcom lost the rights to the Marvel franchise. This may have actually been known before the printing, which could have been a final attempt to squeeze some money out of the title. Due to this, there was only a limited print run. It’s not insanely rare by any stretch, but limited availability and the strong demand for the game have kept prices high.

This sealed PS2 version is already sitting at $275.00 with four days to go. There is another one ending in nine hours however, for $157.50. It’s from a zero feedback seller though, and looks to be in much worse condition. As a last option, you could pick up a Korean Version. These seem to show up sealed a lot on eBay, and usually only sell for $25.00.

There must be an industry website somewhere, that lists print runs for the majority of games published. Does anyone know such a site where I can find this info?