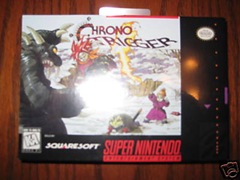 I am dubbing 2008 as the year of the sealed Chrono Trigger as there’s been several of these over the past year. It will be nice to see if the release of the DS version affects the price on sealed SNES copies. Back in February, a copy sold for $1,217.00 and there’s been at least one since for which I can’t find an achieved price.

Oh, and you should also check out this seller. He also has a sealed Chrono Trigger. He states: THIS GAME HAS NEVER BEEN OPENED FACTORY SEALED AND IS THE RAREST SUPER NINTENDO VIDEO GAME IN THE WORLD. He has also overvalued the game- at least in my opinion.