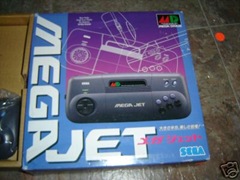 As the predecessor to the Nomad, the Mega Jet was a semi-portable version of the Mega Drive that was used for in-flight entertainment by Japan Airlines. The device lacked its own screen, but could play Mega Drive cartridges when hooked up to a small monitor used on the flights. The unit featured a directional pad on the left side and six buttons on the right, similar to the layout of a game controller.

A consumer version of Mega Jet was later released by Sega of Japan. It was essentially the same as the unit that was used on JAL flights, meaning that it still lacked a screen and could not be powered on without an AC adapter.

I’m not sure of the exact rarity or price of the system, but expect this is be a bit overpriced.