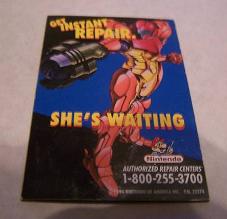 I’ve been bummed lately that there hasn’t been many auctions with Service Center items in them, but I suppose this Metroid Magnet is worth mentioning.Â It was released in 1993 with a similar magnet featuring Diddy Kong and was intended as a giveaway to customers in order for Service Centers to promote their program a bit better.Â The Samus magnet is much more common than the Diddy Kong, simply due to the fact that a seller a few years back was selling tons of these in lots of 6, but had no Diddy Kong magnets to speak of.Â (Sold: $34.30)