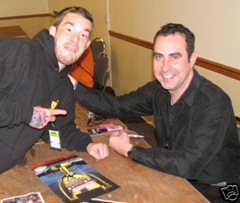 This is one of the posters produced this year and distributed with the NWC game cartridge release from Retrozone and was signed at the AgeExpo 2008 in Knoxville, TN.

Korean Mega Drive (Samsung Super Aladdin Boy)
Star-Fox T-Shirt (Was this the one used for the Star-Fox Super Weekend?)