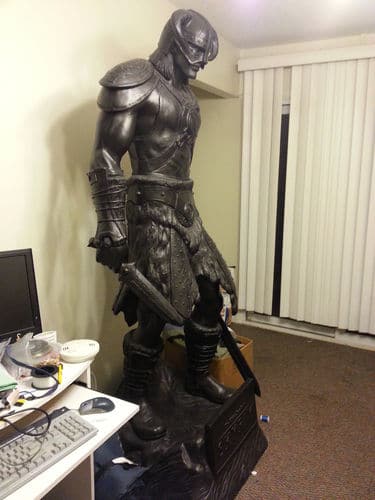 This hulking statue of the Dovahkiin was used to promote The Elder Scrolls V: Skyrim. Bethesda has a history of using large statues to promote their games – they also used a large statue of a power armor suit to promote Fallout 3. Hollow, so it’s not nearly as heavy as it looks. The ultimate Skyrim collectible.

Blizzard Entertainment Employee “5 Year Sword” – One of the coolest employee anniversary promos I’ve ever seen. For those who are bothered by such things, the plaque IS made out to the name of a specific employee.

Pokemon Mini Handheld Console set & 4 games boxed – I’ve featured the Pokemon Mini before, but this set is the most complete I’ve seen

Bayonetta Scarborough Fair Replica Gun – Featured this before, but these are in box