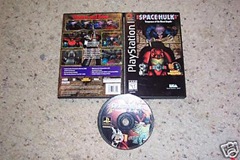 This auction is for potentially one of the rarest Playstation 1 games, at least in terms of the box.

I quote the seller:

This is my holy grail of PS1 long box games and I just hate to let it go.  Before today, there have only been two of these in known existence.  Auction includes the mint/excellent condition Space Hulk long box and functioning Space Hulk PlayStation disc.  The long box DOES contain the correct UPC code, does contain a TEEN ESRB rating, and has the product code on the front and sides (unlike some promotional boxes which may not contain that information…this is the REAL DEAL!).  There are no instructions.  Instructions were never printed as the game was being printed during the transition to standard jewel cases.  I am told that all of the long boxes were supposed to have been destroyed!

The existing theory (and debate) is that this box is a display promo box.

I cite one of the PSX gurus Dangerboy (from a DigitPress Forum Post), as to the reasons that this is believed to be a promo box:

2. There are 15 regular jewel case games that are released inbetween the two of them. Why would they release a long box after so many jewel cases?

3. There has only been only been one confirmed long box sighting, and that was the auction we know about, except it was without a manual.

4. Both Stu (Referring to PapaStu, one of the other go to PSX collectors) and I have Lunar boxes that are the exact retail release, sans barcode. I’ve seen 3rd Party N64 display boxes that looked 100% like the real deal, but with the POP barcode, not the game barcode. We need a scan of that auction long box, so I can run the barcode through the work PC and see if it rings up. Even then, it could still be just a display.

5. EA re-released several of their long box games as double jewel cases, including Fade to Black, Triple Play 97, NBA Live 96, and Theme Park. It’s possible that SH was scheduled for a long box release (and promo’ed as one) but was just tossed into the double jewel case lot at the 11th hour when the others were being re-printed.

So basically, everything comes down to the manual. Unless someone, somewhere, has a long box Space Hulk PSX manual, there is no real concrete evidence outside of the one encounter that we already have documented.

So, I would expect the debate to be reignited because of this auction, but given the price already, there should be a  lot of bids in on this one.