I should probably do an article about DS Lite systems one day, but it would most likely take me a year and a half to research – and I’d probably miss a solid twenty of then. Edit: Looks like there are actually less than thirty, stay tuned for a post about these soon. 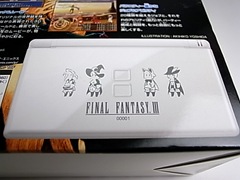 This limited edition Nintendo DS Lite featuring Final Fantasy III graphics printed on the outer shell was available August 28, 2006 for 22780 Yen (about $197.23) – Only in Japan. The DS Lite is the standard white version with four characters from the game along with the Final Fantasy III logo appearing on the front. It seems these were stamped with a serial number, though I have no idea about production quantity. According to the box, the serial number is five digits.

There’s also a Pirates Of The Caribbean DS and a Pikachu Edition available at the moment as well. For you demo collectors there’s a Euro copy of the Volume 6 Download Station, a Euro Brain Training demo.

What really has me excited though, is an auction I missed out on. A Pokemon World Champsionships 08 Limited Edition DS Console. Only 48 were made, and 16 were given out to the top contenders in all three age groups. While I doubt I would have put a bid in, I would have liked to share it with you earlier.