Nicola posted one of these some time ago, but I figured I would take a moment to go a little more in depth on the "system" this time around.

The Atari Video Music was designed by the initiator of the home version of Pong, Robert Brown and released by Atari in 1976. The idea was to create a visual experience through a home users Hi-Fi stereo system. 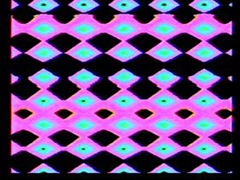 It hooked up to a TV through an RF switchbox and to an audio amplifier with RCA jacks. To keep up appearances with other Hi-Fi components of the time, the face was a brushed metal plate with wood panel sides. The unit consists of 5 potentiometer knobs and 13 push-buttons. The way the audio generates the visual is in a basic form of a diamond with two parts. The outer part is the left audio channel while the right is the inner part.

Fun Fact: Devo actually used one for the background in the video for "The Day My Baby Gave Me A Surprise".

The unit never gained enough popularity and was in production for only a year. The visualizer engine was then eventually used on the Atari Jaguar CD when an audio CD was in the system.

Here’s a video out the unit in action. It’s very trippy.

There are currently three on eBay, including one with all original packaging that looks to never have been used.