I am always greatly appreciative (and often find myself intrigued) by the items video game collectors decide to collect that aren’t games.Â Bobbleheads are an item that many can find to be annoying, but I’ve always felt that there was a certain charm to them.Â I always had a desire to collect them but could never quite justify picking up the habit.Â And after doing a bit of searching on ebay and some digging, I’m surprised by how many different ones there actually are out there.
Â

Obviously, there are a number of Nintendo related characters that have made their way into BobbleHead form since their main lineup of characters look so cartoonish.Â Nintendo has had some commercially available versions of Super Mario characters more than once.Â These lines have contained characters such as Mario, Luigi, Bowser and Yoshi. 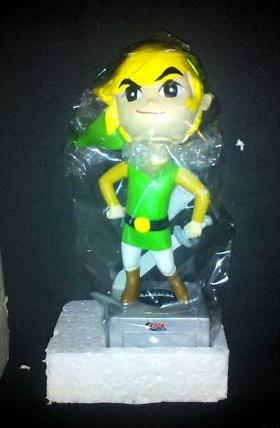 There have been a number of games where the preorder item has been a bobblehead showcasing aÂ mainstay rom the game.Â Â The most expensive that I’m aware of is the Link bobble that was given out by some retailers for the release of LoZ: Windwaker (The last one sold on ebay went for $85, and I have seen it go higher!)

Target had number of bobbles available exclusively if you preordered particular Nintendo Products such as a new GameCube system, Starfox Adventures, NBA Courtside 2002 and a new Gameboy Advance.

Big Willy was a preorder giveout with Destroy All Humans: Big Willy Unleashed.

In the Fallout 3 Survival Edition, you’re treated to a Vault Boy Bobblehead as part of the promo package.

Funko has a line of Halo 3 Bobbles.

I’m not sure where this came from, but it’s a very nice looking bobble of Dr. Muto from his self titled X-box game.

At E3, two bobbleheads were given out to promote the release of the game Viewtiful Joe.

Overall, these bobbleheads can add some great eye candy to a gameroom, though I’m not sure what other appeal they might have to a potential collector…then again, some people collect action figures with the sole purpose of staring at them, so why not?Â Personally, I’d love to see a few more gaming franchises pick these up; mainly the Bubble Bobble series…that would be grand!