Unless you live under a rock (or have absolutely zero interest in PC gaming) you probably already know that Diablo III was announced this weekend at Blizzardâ€™s Worldwide Invitational. 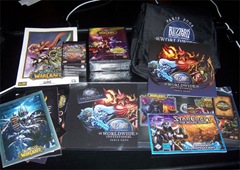 Since we don’t have any of the swag bags on eBay yet to feature (this years pictured), I figured I would look for some interesting Diablo stuff in general. I look forward to one of the bags showing up on eBay however. It comes in a mini backpack of sorts, emblazoned with the WWI logo includes a host of loot, including a WOW in-game pet (not yet redeemable), a beta key, a programme, a figure from the Upper Deck miniature game, a notebook and a mousemat sporting the eventâ€™s banner featuring Arthas as well as characters from Diablo and Starcraft II.

Anyway, while I wait here is some cool Diablo stuff I could find. 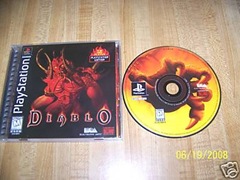 While a lot of people hate this game and swear is should never have been ported, an equal number of people think it was a great idea. Either way, it still manages to fetch $30+ relatively easily. This port has people praying that Diablo III might actually get a console release as well. 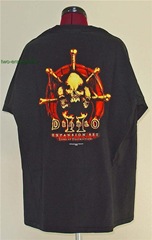 Very cool T-Shirt, and the reason why I never allow myself to buy vintage gaming tees. I would just wear it over and over till it fell apart. Still, would be a couple of cool months. Looks like it will be pricey too.

Included is the complete set – Diablo, Barbarian and The Unraveller. From what I understand, these were mainly sold through the Blizzard online store. Very cool looking figures. 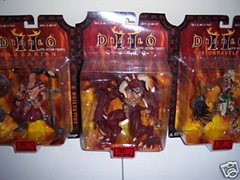 I can only find two of these and am wondering if there is a third. Either way, there is Baal’s Minion of Destruction and The Corrupt Rouge. I don’t find these as exciting as the Diablo II figures, but in theory they should be rarer (unless they were all released at the same time). There seem to sell for much cheaper too. 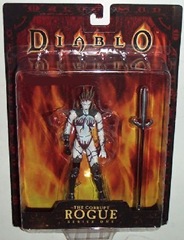 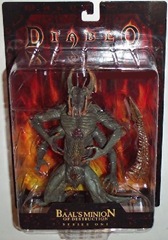 There you have it. Now I’ll go back to waiting two years before they even announce a Diablo III release date.