Up for grabs we have one of the rarest and most desired Playstation 1 promo items. It’s also definitely one of the coolest looking, with it’s sleek metal case and golden GunCon. 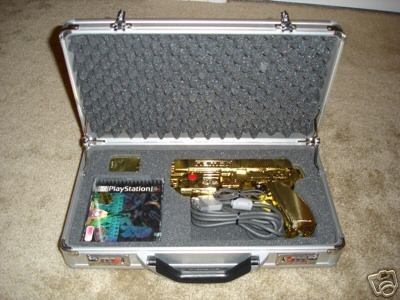 Less than 50 of these cases were produced and awarded to a select few competitors in Working Designs’ Elemental Gearbolt tournament at E3 1998.

Apparently only four have been confirmed. This includes one owned by Working Designs’ CEO Victor Ireland. I assume this now makes five…….

The entire package consists of the aluminium embossed case, the gold Namco brand GunCon, an official PlayStation Memory Card, a factory sealed new copy of the retail release version of Elemental Gearbolt, and a congratulatory letter from Working Designs.

I’m not a PS1 collector, but this item even has me drooling.

Even more interesting, is that this one includes the gold memory card which I don’t think many others included. According to website Game Rave (whose owner sports a complete US PS1 collection):

Originally planned to be gold plated as well, it seems that due to production issues Working Designs opted to just coat the gun by itself. Oddly enough, the included memory card is actually the very seldom seen Cherry Red edition. The concept of a gold memory card being abandoned can be verified in the included letter. It only mentions the GunCon by gold color. We are currently researching to see if there were gold cards at all in distribution.

His copy, as well as the copy that was on eBay late last year include the red card. The copy of for grabs however, does include a gold plated memory card, 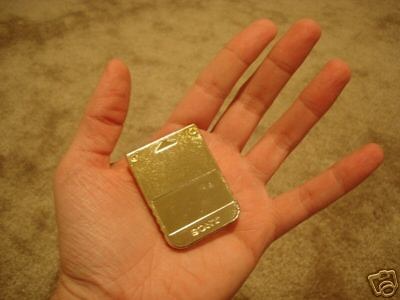 The last copy sold for $787.00, which as far as I’m concerned was cheap. If you want to own this one which is possibly even rarer, than click here to hit the auction.