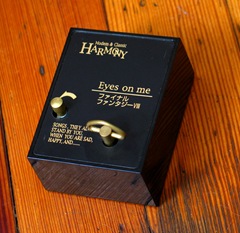 Square Enix released an official Final Fantasy VII â€œAerithâ€™s Themeâ€ music box in 2005, which was limited to one hundered copies and cost around 40,000 yen (~$400 US) . According to the folks over at the Final Fantasy Collectibles Forum, on the rare occasion that it goes on sale it now fetches over $2000.00 US.

This auction is for a differnt Final Fantasy VIII music box that plays the theme song, “Eyes on Me.” This is a Japanese import item manufactured by Artec and according to the back, is patented. Apparently, the seller purchased it from a Japanese auction site awhile back and has never seen another one like it. It’s most likely an unlicensed item, but is pretty cool none the less.

The music box plays the chorus from Faye Wong’s “Eyes on Me,” the theme song to Final Fantasy VIII, which was composed by Nobuo Uematsu.

The seller admits they have a high asking price, but is hoping for offers, or more information about the item.