If you’re unfamiliar with the VGA (Video Game Authority) or grading in general, here’s what you need to know. When you get something graded, you pay a fee (Roughly $25.00 from what I understand for the VGA) to a company whch uses their own set of standards to grade a collectible and then seal it in a plastic “slab” that is tamper evident. If the outer “slab” is ever opened or tampered with, the grade becomes invalid.

In other fields of collecting such as coins, toys, action figures, sports cards and comic books, third party grading has essentially become standard on all valuable and mint condition items. If you have have something which isn’t graded, odds are it will sell for less than the same item in worst condition, but graded. Having something graded increases the value. Whether that’s artificial inflation or not, the fact is that grading will make an already expensive item more valuable.

Now, the video game collecting community has been buzzing for years about this, and what effect it would have on our hobby. Now that it’s actually here, there are a lot of opinions floating around. 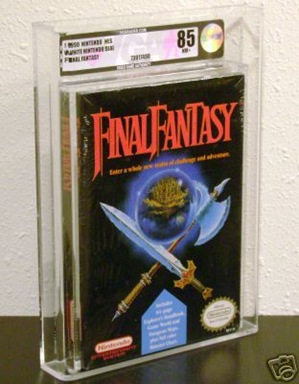 The way I see it, video game collectors fall into three sets on this issue. I understand this may not cover everyone completely, but from all the forums I’ve read these seem to be the largest, or most vocal groups.

First, sealed collectors themselves. These people already have large collections of sealed games, and in theory, stand to benefit financially from the effects of grading if they ever sell their collection. Secondly, most are for grading as it allows them to know for sure what they are getting when they make a new purchase. I have seen however, new sealed game collectors who are not happy, as they see their hobby getting significantly more expensive.

Secondly, there are collectors who have no interest in sealed games, but demand only utterly mint, perfect, gems in their collection. There are more of these out there than I realize, and they are often willing to pay through the nose to get the absolute utmost quality for their collection – even going as far as to open a sealed game. The main concern these collectors seem to have, is that their CIB games are going to become more expensive to collect. Others however, see it as a money saving venture. Instead of buying five copies of a game to get one with no fingernail scratches, all they need to do it find a graded 85+ copy. I assuming on this issue however, that the VGA will be grading loose and CIB games. I can’t find any info to confirm or deny that, but considering they grade loose figures, it’s safe to assume they will at some point be doing this, even if they don’t at launch.

Lastly, you have the group that I fall into. We frankly, don’t really care. I’m not a sealed collector, I’m not someone who has to have everything in mint condition and even worse – I could care less if I buy something ungraded. The last one is the most important part here. If graded items get more expensive, then *hopefully*, ungraded items get cheaper. Now, I know people are concerned that the opposite is true. That everything will get more expensive. Here’s what I see, and I think it’s a good theory. I would love to hear from someone who watched grading be introduced to another hobby however, and watched its effect unfold.

Mint items become more expensive. People look to these to buy, get graded, then resell at a profit. These will be in competition with people who want game X, but won’t pay for a graded edition, so the price rises. This will tickle down, but shouldn’t affect mid level quality games.

Keep in mind this is referring to “good” and “rare” games. Having a graded To The Earth for NES, a copy of Madden 94 on the SNES or a copy of BioFreaks on the PS1 really isn’t going to matter. 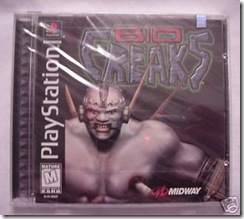 Side note: I have thirty sealed copies of Bio Freaks… anyone need one?

A bigger problem in my mind however, it the legitimacy of a grade. I realize the company behind the VGA has extensive experience in grading other collectibles. This means that there probably not stepping into the ring lightly. The problem is though, that many people has stated that resealing video games is relatively easy enough to do if you have the right equipment. These same people who live and breathe sealed games have admitted they’ve been fooled once or twice.

If sealed games suddenly spike in value, what do you see happening? Bingo, more fakes. If they graders aren’t educated enough to spot them, we’ll than the grades mean nothing to begin with.

One of the more interesting quotes I’ve seen:

As a person who proved the “seal” on a game no matter how well it looks doesn’t mean squat, it’ll fail quite miserably. Even a decently scratched box (like a PSX longbox) will look fine underneath the shrink.
Bad, bad idea. Dangerboy – DigitPress

I understand that you can train people in a given field, and that their graders will have experience in other fields that may transfer to game well. The issue is the scope of the knowledge. How many sealed games do you have to inspect until you can spot a near perfect reseal? Then you need to do that for all systems. It will be interesting to see how this turns out. However, once it gets graded, no one in their right mind will no something is resealed and even if they owner did – they wouldn’t care.

I’m waiting for someone who thinks that grading is the worst thing to happen to the hobby to make a statement. Take everything they’ve learned, reseal some expensive game and then get it graded. If they can get it passed and prove it was resealed, the whole video game grading industry will lose momentum.

One other thing I’ve noticed, it that some argue that this will bring legitimacy to the hobby. This is a stupid argument in my mind. Who cares if video game collecting is legitimate? We already went through the popularity phase as everything retro was popular thanks to Hot Topic and Emo Kids. Video game collecting should never be an investment. Yes, we all want our games to go up in value, we all want to sell out games for more than we paid for them. Put your money is much better off in a mutual fund than in eight bit plastic. 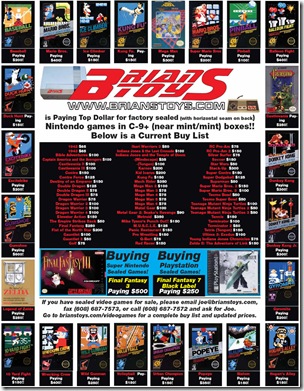 Maybe I’m wrong though. Maybe it is becoming mainstream and legitimate. BrainsToys.com is at least one retailer who is looking to get in on the action. I’ve never heard of this company before, but I’m told there a rather large seller of graded toys and the like.

Click on the link to the site, or the ad for larger version. Those are some of the items they’re looking for and the prices they’re paying.

The prices are rather odd in my mind. Obviously they are speculating and looking to pick up items that they can sell for a lot more when graded.

Weird thing is that some of the values are below market value, some are above.

It seems to me the rare stuff on that list is below market value for the most part. The game from popular series on the other hand seem to be above market value. It looks like Brians Toys are banking on graded popular games and series to make a hefty price jump.

Look at the comic market. Random comics aren’t worth a ton, graded comics that are popular or rare are worth a nice bit.

Think about that for a second and apply it to the video game market. What happens?

Essentially, everybody wins. I understand if you’re going to be buying mostly graded stuff, your hobby just got more expensive. Tough luck. Those of you who have the balls (and the bank account) big enough to run that way really don’t have any right to complain. Weigh the value that your items are more likely to increase in value over time and that you’ll likely never be ripped off again and it starts to look like a fair deal.

Once again, for some people grading will suck. For the average collector however, grading is good.

Lastly, The VGA hasn’t officially launched their site, but according to Bronty-2 (who has worked closely with senior people in the company and is a noted sealed collector himself) they should be launching on Monday. They are already proving grading however, you just need to get in contact with them to request it. They’ve also done a few games at at least once comic expo.

As they launch, and as more games hit the market, we’ll have a full understanding of what it actually means for our hobby. Until then, well…. we will see.

Oh wait, yeah the games on eBay. Almost forgot about them.

Seller BigHedToyz has the first of these currently listed. 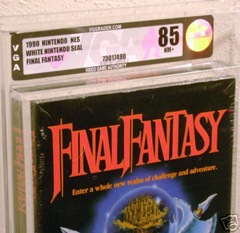 He has Jackal, Bionic Commando, Castlevania 2, Super Mario 3, Metal Gear, Metal Storm, Trojhan, Gyruss, Contra Dragon Warrior and Final Fantasy for NES. A mix of rare, popular and crap games that will enable us to see how the market is going to react. There is also a lot with two Atari and a SNES Star Wars title. I should mention that I think the market for graded games will cross over to other collectibles. For example, a Star Wars collector will have more interest in a Graded Game. The same for other series with a huge fan following such as Star Trek, etc.

Anyway, this first batch of graded games all have three days left and are at pretty low prices so far.

Comments and opinions appreciated and welcome.