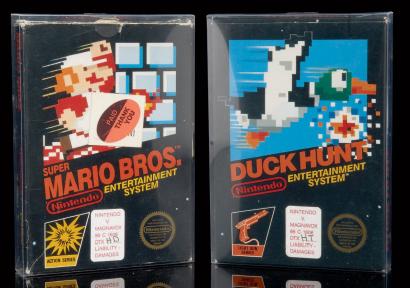 Here we have a true museum piece. Â To the average collector these appear to be regular old black box NES games. Â However, these were the actual reference items used in the court case “Nintendo Vs. Magnavox”. Â The games featured here were a few of many bought by Magnavox to use in their defense. The trial concerned Nintendo trying to invalidate Baer’s patents, pleading that William Higinbotham’s Tennis For Two preceded Baer’s video game invention, therefore not having to pay royalties to Magnavox anymore. Â Ultimately Nintendo lost the court case. Â These are authenticated by David Winter. If you want more details on the case, look here.

Previous auction featuring other Nintendo games used by Magnavox during the 1985 court case.

EdTris and SoundX for Atari 2600 – Early homebrews (circa 1994), autographed and complete.

and lots more for sale, from Magnavox to PS3:

The rest of the private game collection