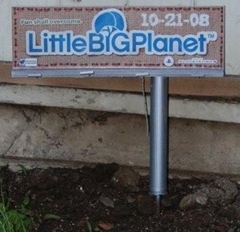 This is one of 1000 Little Big Billboards used in a marketing campaign by Sony. It’s a little mini billboard with a little ladder and little fake lights. Apparently these billboards were found in major cities all across the world

The billboard itself has about a 6 inch peice of metal on the bottom of the base to insert it into some grass/dirt whatever. So far, these have been fetching around $100.00 each.